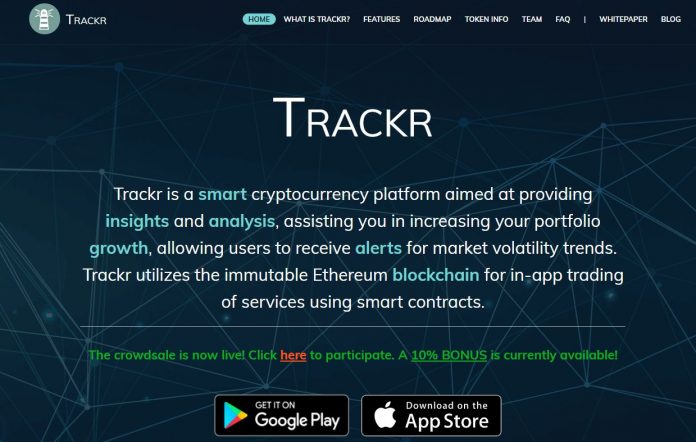 Trackr, a crypto analysis engine, has been met with success in its public crowdsale. The project has already gathered a lot of interest and raised nearly $150k in the first week with another 3 weeks to go.

Built on the immutable Ethereum blockchain technology and crypto exchange API’s, the team have developed an analysis engine with an accompanying mobile app that lets users perform automatic analysis of their crypto investments. The user interface is optimized to provide users a snapshot of their profit/loss and identify areas for improving their investment strategies. Trackr’s whitepaper goes more in-depth.

A free to use Alpha version can be downloaded on iOS and Android devices through the Play Store or the App Store. The proof of concept version is capable of importing transactions from your wallet and visualizes your profit/loss trajectory, furthermore it can be configured to provide notifications to alert you of market events such as pumps and dumps. The Alpha has been received with success and moving forward the team have devised a 7-phase roadmap plan which will see it implement analysis algorithms such as machine learning and Monte Carlo simulations to predict market prices and other advanced features such as backtesting of investment strategies.

The Trackr token, ‘TKR’, serves a number of purposes, most notably acting as the currency which allows in-service purchases, users can operate in a decentralized environment and make use of Ethereum’s peer-to-peer technology to share investment strategies and portfolio successes with other users for a price they set, charging a nominal fee to use the platform which is transacted on by smart contracts.

Funds raised through Trackr’s crowdsale will be distributed to further development of the Trackr offering which includes infrastructure and legal costs (40%), team expansion (20%), research and design (20%), product development (10%), and advertising/marketing (10%).

For more information on how to contribute to Trackr’s on-going crowdsale, please visit here.