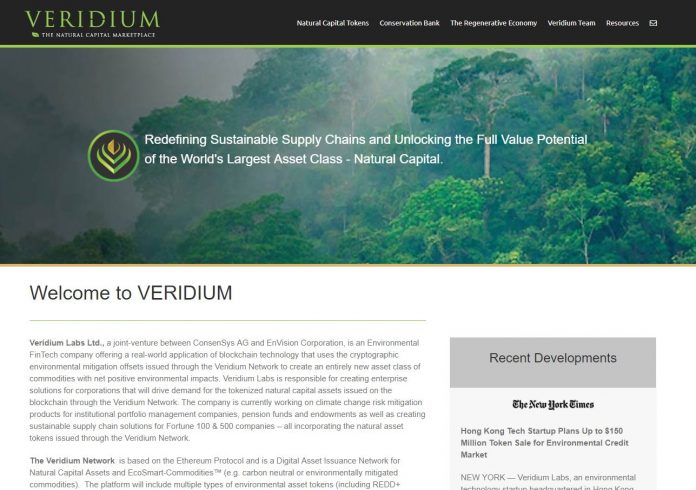 Veridium Labs the environmental fintech creating an open natural capital market, has today announced its upcoming crowdsale for the first-ever token backed by high quality natural capital assets, the world’s largest undiscovered market. The token offering will raise capital with the sale of Ethereum-standard TGR tokens, asset-backed by the highest quality, United Nations-recognized forest carbon offset credits, which will be bundled with free VERIDIUM membership tokens that grant access to its marketplace platform.

Veridium Labs is a collaboration between EnVision Corp, a pioneer in market-based conservation solutions and early funder of the world’s first and largest Forest Conservation Carbon project, ConsenSys, the world’s largest Blockchain venture studio, and Alchemist Ventures, a full-service Blockchain investment and advisory company. Alchemist Ventures members have served executive roles as founders, major investors, and leading advisors to projects including Ethereum, Bancor, ZCash, and Factom, amongst others.

“If we expect corporations to achieve truly sustainable supply chains by mitigating their broader environmental footprints, then we need to provide them better tools. VERIDIUM is uniquely leveraging Blockchain technology to unlock the enormous value potential of natural capital, an untapped and undervalued asset class estimated to be worth trillions of dollars. By creating a transparent pricing mechanism, VERIDIUM will offer the market unprecedented liquidity and fungibility for natural capital assets and, in the process, provide a new vehicle for corporations to embed environmental replacements into the cost of their products through investments in natural capital.”

“Blockchain technology and Ethereum in particular is enabling the world to tokenize an enormous array of assets. In addition to creating greater fluidity in markets, by shrinking the clearing and settlement durations into the instant of the transaction, the act of tokenization enables markets and ‘assetization’ to be brought to situations where it was previously impossible or difficult. Putting natural assets on the same level as traditional tradable assets forces the world to take notice of the tangible value of such assets and enables conscientious observers to account for such value and act where previous generations blindly and criminally ignored such externalities. This new market might just enable a rebalancing of how resources are used and preserved, and serve as a powerful mechanism to drive and measure sustainability.”

VERIDIUM membership tokens will exclusively be issued during the crowdsale. Once the initial token offering concludes, additional tokens backed by natural capital assets like water rights, renewal energy and biodiversity credits can be issued and traded on the Veridium Network by approval of the independent, non-profit Veridium Foundation. The VERIDIUM membership token will grant holders access to rewards points from the fees charged on all new natural capital assets onboarded to the Blockchain through the Veridium Network. These rewards points may then be used to participate in member only auctions of discounted natural capital tokens. VERIDIUM tokens will be based on Ethereum ERC-20 standards.

TGR tokens, backed by Triple Gold REDD+ Verified Carbon Credits, will be the first high quality natural capital-backed token onboarded to the Blockchain through the VERIDIUM network. Each REDD+ credit is equivalent to the removal of one ton of greenhouse gases from the atmosphere, and conserves, on average, one square meter of biodiverse tropical forest. As each TGR is backed by real world natural capital, new tokens can only be minted when new natural capital is acquired and verified as meeting the internationally recognized standards such as the VCS and Climate, Community & Biodiversity (CCB) standards, or American Carbon Registry (ACR) standards.

At the token offering, up to 15 million TGRs will be available, backed by 15 million independently audited and registered Triple Gold REDD+ credits generated by the Rimba Raya Biodiversity Reserve in Borneo, Indonesia. The Reserve is a high conservation value, tropical peat forest approximately the size of Singapore, and one of the world’s most endangered ecosystems. It contains the highest biodiversity and carbon stocks of any forest type, and filters and conserves trillions of liters of fresh water every day. Most notably, it protects over 120 threatened, vulnerable and endangered species listed on the Cites RED list and is home to one of the largest remaining high-density populations of endangered orangutans.

Veridium Labs’ Board of Advisors includes pre-eminent experts such as Martijn Wilder Member of the Order of Australia, Head of Baker & McKenzie’s Global Environmental Markets and Climate Change, Chair of the Australian Renewable Energy Agency (ARENA) and a Director of the Clean Energy Finance Corporation, WWF (Australia) and the Climate Council; Jeff Reece, Director at Greenhill Cogent; Sean McDermott, an environmental law specialist in the offshore wind energy business and board member for Envision Corporation; and John Bishop, an activist investor focused on environmentally and socially responsible impact investments.

“By leveraging some of the greatest minds in Blockchain technology, responsible for some of the biggest projects in the history of cryptocurrency, Veridium Labs has created a viable mechanism and roadmap for achieving sustainable supply chains with third party certification and is pioneering a path to the regenerative economy.”

“TGR offers an opportunity to acquire enhanced access to underlying REDD+ Credits. Just as importantly, TGR provides a means to reduce companies’ carbon and broader environmental footprints, while supporting rural community development and biodiversity conservation, including the endangered orangutan at Rimba Raya Biodiversity Reserve. We believe that TGR serves as an outstanding hedge against climate change and stranded assets risk embedded within investment portfolios,” he added.

TGR tokens will be available for purchase in Bitcoin, Ethereum, and major fiat currencies. For more information, visit veridium.io.