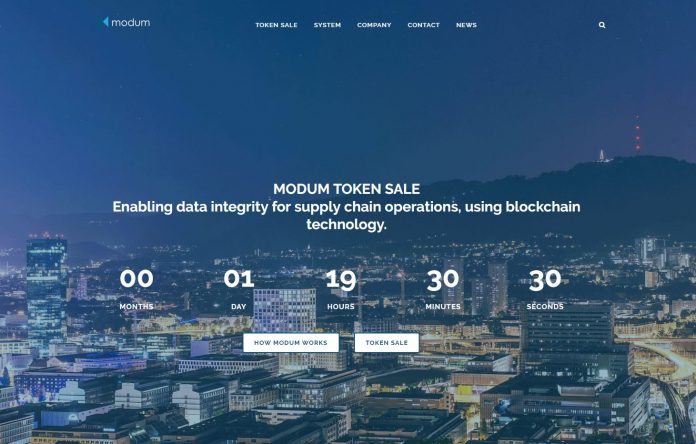 On September 1, 2017 the MOD token is officially available in public crowdsale. In a private pre-sale, the token raised more than 1.25 Million USD for the innovative Swiss start-up, pioneering the use of Blockchain and IoT technologies in the pharma supply chain. This week modum has announced a strategic collaboration with IOTA, starting with the acceptance of the IOTA token in the MOD crowdsale.

Blockchain technology has the potential to create new foundations for global businesses. While most investors have seen interesting applications in fintech, modum.io is one of the few start-ups focused on the 8.1 trillion USD global logistics market.

modum.io has developed sensor devices, which record the environmental conditions that a package has been exposed to while in transit. A sender can pre-program parameters into the Blockchain, which enable notifications if a deviation in conditions that may affect the quality of the product has occurred. The records are immutable and auditable, fulfilling regulatory requirements. This passive monitoring strategy reduces the need for costly and inefficient actively-cooled transport solutions with a potential industry wide savings of 3 billion EUR per annum.

MOD Tokens are backed by the business value of modum.io AG. The recently modified EU GDP regulation requires that pharma producers and the over 10’000 distributors deliver evidence that temperatures did not affect drugs in transit. This use case is an early application of Blockchain technology in the logistics sector where a real, regulatory-driven market need for the technology exists.

After a successful first year of operations, modum.io AG announced its ITO in early August: 20.1 million MOD tokens will be available in a public crowdsale, each token coming with profit sharing and voting rights at established milestones to align the modum team with token holder interests.

“We have a solid product with several successful pilot tests completed, a working hardware prototype, a strong team of developers, and a handpicked team of advisors. We are running this token sale to fundraise for the future development of modum.io and will give our cryptocurrency backers the same rights that institutionalized investors have.”

Recently, on August 21st, 2017, modum.io announced the start of a long-term strategic collaboration with IOTA by integrating IOTA tokens as an investment possibility in the MOD Token sale.  According to El Bay: “To execute our vision we need a technology for our sensor devices that allows the transfer of value without charging tremendous transaction fees. IOTA’s infrastructure will be very valuable to us and are working towards a proof-of-concept for our next industry tests. We plan to publish the results by fall 2017.”

Dominik Schiener, Co-Founder of the IOTA Foundation, won the Shanghai Blockchain competition with a supply chain application. According to Schiener:

“It is great to see an IoT and Blockchain company, with a clear go-to market strategy, thinking about utilizing the IOTA infrastructure. modum.io is a Blockchain enabler and we are eager to be one of the technologies behind the project.”

Located in Zurich, between the “Crypto Valley” in Zug and Basel, a hub for major pharma players, modum.io is well positioned to bring their system to market. modum.io works from Technopark, a well-established centre for tech start-ups and innovation in Switzerland. The company benefits from strategic partnerships with the University of Zurich and the University of St. Gallen and industry partners, including SchaerPharma, Variosystems, and Lykke Corp.

Facebook
Twitter
Pinterest
WhatsApp
Previous articleDECENT Expands Offices To New York City
Next articleVeridium Labs Launches Token Sale, Creating Global Marketplace for Carbon Credits & Natural Capital
Richard Kasteleinhttps://www.the-blockchain.com
In his 20s, he sailed around the world on small yachts and wrote a series of travel articles called, 'The Hitchhiker's Guide to the Seas' travelling by hitching rides on yachts (1989) in major travel and yachting publications. He currently lives in Groningen, the Netherlands where he has set down his anchor to raise a family and write. Founder and publisher of industry publication Blockchain News (EST 2015) and director of education company Blockchain Partners (Oracle Partner) – Vancouver native Richard Kastelein is an award-winning publisher, innovation executive and entrepreneur. He has written over 2500 articles on Blockchain technology and startups at Blockchain News and has also published in Harvard Business Review, Venturebeat, Wired, The Guardian and a number of other publications. Kastelein has an Honorary Ph.D. and is Chair Professor of Blockchain at China's first blockchain University in Nanchang at the Jiangxi Ahead Institute software and Technology. He has over a half a decade experience judging and rewarding some 1000+ innovation projects as an EU expert for the European Commission's SME Instrument programme as a startup assessor and as a startup judge for the UK government's Innovate UK division. Kastelein has spoken (keynotes & panels) on Blockchain technology at over 50 events in 30+ cities.