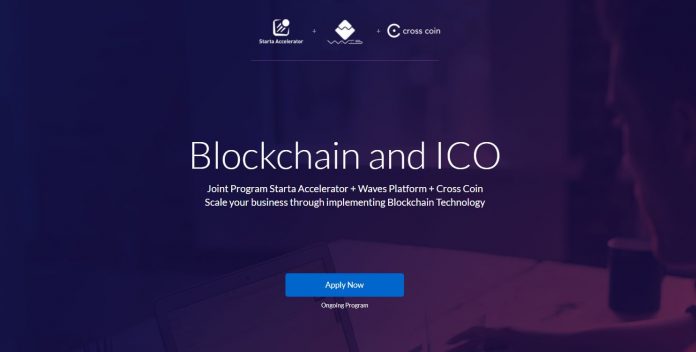 The New York-based Starta Accelerator has announced the launch of an accelerator program, called “Token Rockets”, for startups working with Blockchain technology. The training will culminate in a new crowdsale of cryptographic tokens for each of the startups.

From September 2017, tech startups from the countries of Eastern Europe will be able to implement or develop Blockchain models within their businesses, as well as preparing and conducting a crowdfunding campaign to sell and distribute cryptographic tokens. The program is designed for startups whose business model is either based on or can be improved by Blockchain technology. Starta Accelerator has partnered with the Waves Blockchain Platform for this initiative, as well as the Singapore-based Cross Coin, which has become a partner in cryptocurrency technologies.

“One of the options for developing such startups will be the introduction of tokens into the business model – for example, as a means of settlement between counterparties or participants in the ecosystem. The final part of the program – the token sale – is not only a means of funding startups, but also an opportunity to form a circle of regular users interested in the development of the project and ready to give feedback about the product,” explained Ekaterina Dorozhkina, Head of Starta Accelerator.

“Blockchain technology can improve business processes and disrupt entire branches of the traditional economy. We will see significant progress in the coming years. Raising funds for the development of business in the cryptocurrency sector is another promising area for Blockchain use. According to experts, startups have raised up to $1.2 billion in crowdfunding campaigns in the cryptocurrency market since the beginning of 2017 alone,” adds Sasha Ivanov, founder and CEO of Waves.

The founders of the accelerator have their own experience of this trend. In July 2017, they held a token sale via Cross Coin, raising $5 million from the cryptocurrency markets for investment in Starta Accelerator projects in less than a day. A number of companies, such as Anryze and Cindicator, passed the Starta Acceleration Program in 2017 and also plan to distribute their own tokens. Crowdvouching loan service Suretly, one of Starta”s portfolio companies, has successfully secured funding from the cryptocurrency community. SUR tokens issued by the company will be accepted in Suretly”s mobile application as a guarantee of loan vouching.

More information about the terms of participation in the program is available on the accelerator”s website: http://www.tokenrockets.com/