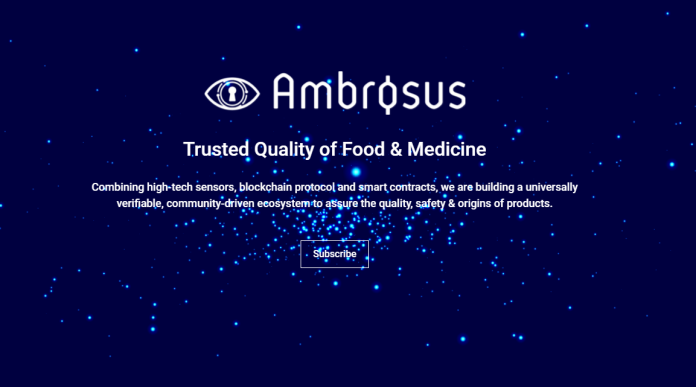 Ambrosus, the Blockchain-based ecosystem for the supply chain, today announced that Oliver Bussmann, one of the world’s leading experts on financial technology, has joined as a Strategic Advisor. President of Crypto Valley Association and Founder of Bussmann Advisory, Bussmann has served as Chief Information Officer for banking giant UBS and previously served in a Global CIO capacity for enterprise software leader SAP. Ambrosus separately announced that over $35 million USD had been raised in pre-sale for their widely anticipated token generation event (TGE).

“Given the enormous scope and far-reaching potential of our project, it’s vital for us to not only call on those with the technical knowledge, but also in-depth strategic expertise. Ambrosus is honored to welcome Oliver Bussmann as a Strategic Advisor. Recognized globally as a technology thought leader and a driver of change, Oliver’s unparalleled experience will be immensely helpful as we strive to transform traditional supply chains and commodity markets with multiple emerging technologies,” said Angel Versetti, Ambrosus Co-Founder and CEO.

Founded by Angel Versetti and Dr Stefan Meyer, Ambrosus combines high-tech sensors, Blockchain technology and smart contracts to assure the quality, safety, and origins of essential products such as medicine and food. Headquartered in Zug, Switzerland, Ambrosus is officially endorsed by EIT Food and SQS (Swiss Quality and Safety Association) and has received financial backing from the Government of the Canton of Vaud, Switzerland. In addition, Ambrosus is the first Blockchain project to become an official partner of the United Nations 10YFP Sustainable Food Systems Programme, which is responsible for the implementation of the Sustainable Development Goals.

“The Ambrosus project is a prime example of the inspiring innovation and cutting edge technological development currently being conducted in Switzerland. With a dynamic ecosystem of complementing technologies developed within and around the Ethereum ecosystem, Ambrosus has devised a bold rethinking of how global supply chains and markets could operate. By joining the Ambrosus Advisor Board, I am delighted to play my part in driving transparency in the food and pharmaceutical sectors, that will enhance consumer and economic well-being on a global scale,” said Oliver Bussmann.

As Founder and Managing Partner of Bussmann Advisory, Oliver Bussmann advises enterprises, top-tier consultancies, and financial services companies looking to stay ahead of the digital disruption curve. From 2013 to 2016, Bussmann was Group Chief Information Officer of UBS, where he successfully led a major IT transformation effort, instituted a new innovation framework, and established UBS as a pioneer in the development of Blockchain for use in financial services. Prior to joining UBS, Bussmann served as Global Chief Information Officer at SAP, where he led a widely lauded and transformative effort towards mobile. Previously, Bussmann served as CIO at Allianz North America & Mexico and in other executive capacities at Deutsche Bank and IBM.

One of the most influential individuals in the financial technology sphere, Bussmann’s achievements have been broadly recognized. Bussmann was named COO/CTO of the year by Financial News/The Wall Street Journal, European CIO of the Year by INSEAD/CIONET, was the recipient of the Elite 8 Award, given to the most innovative leaders in technology working in capital markets by Wall Street & Technology Magazine, and was twice included on the Financial News “FinTech 40” list of innovators shaping the future of finance.

“Over time, the world has become accustomed to recalls, scandals and fraudulent behaviour. Ambrosus was founded to overcome these current deficiencies and challenges with the Ambrosus protocol set to revolutionise how we produce, package and purchase our everyday products. Oliver Bussmann will be an invaluable member of our growing team, as we build a safer, transparent and sustainable future,” concluded Versetti.

The Ambrosus token sale will take place from September 15 to October 14, 2017, where participants can use ETH and major fiat currencies to participate in the sale. The Amber token (“AMB”) conversion will occur at the token sale rate of 1 ETH = 1000 AMB which will be the price of Amber tokens at the public token sale on September 15.