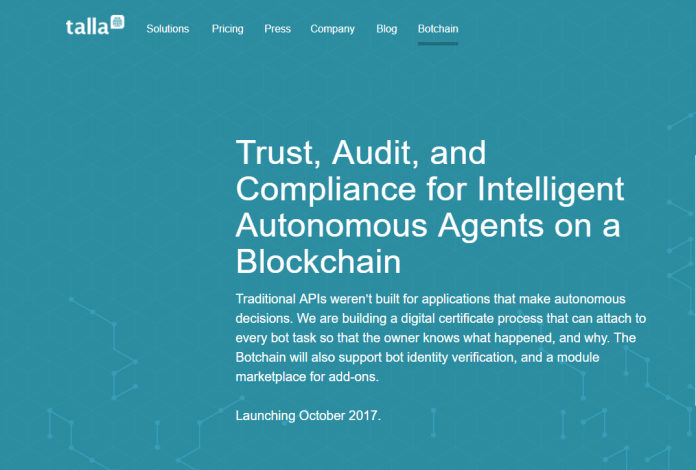 Talla, a leading producer of B2B A.I. software, today launched one of the first platforms to combine artificial intelligence with blockchain technology to bring trust and security in using A.I.-driven autonomous agents in the workplace.

This platform, called the Botchain, will help foster mass-adoption of A.I. products in business with intelligent agent auditing, compliance regulations, and communication standards on a blockchain.

As A.I.-based systems become more prevalent, both users and applications will require a network where identities and transactions are verifiable and auditable. blockchain technology is the missing piece that enables this.

“Imagine a world in which hundreds of thousands of transactions occur each minute. Some are human-to-bot; others are bot-to-bot, and some even involve a series of autonomous bots,” said Rob May, Talla CEO. “Each transaction requires an immutable digital certificate to record what happened and why. Bots in the enterprise will only grow when there are ways for them to establish trust with humans and with other bots.”

Traditional APIs, which were created for simple data exchange, are ill-equipped to handle A.I.-driven autonomous systems. But a new generation of systems are emerging that can intelligently adapt, change, and make decisions over time. They are helping to create the “Fourth Industrial Revolution,” in which we are experiencing huge shifts in the way work gets done using artificial intelligence. The new requirements for safety and security using autonomous systems cannot be solved by existing methods.

The Botchain provides critical systems for anyone that uses A.I. powered products, as well as those that develop them. For example, end users of any A.I.-powered, autonomous system will gain an audit-able trail of interactions and decisions made, accomplished by hashing information about each agent task to the blockchain so it cannot be changed. Bots’ identities are verified with certainty to the humans that use them, and to other bots, preventing bot spoofing and spamming.

Developers benefit as well by ensuring system security, including:

Participation on the Botchain-driven network is via cryptocurrency. Accompanying the Botchain launch, Talla will have a token sale. The dates for the sale are yet to be announced, but those interested can request information, or express interest in the token pre-sale by visiting the site.

The Botchain is in development with a number of undisclosed partners and will be available publicly in late 2017. Request information on development partnerships by visiting their website.

Talla is based in Boston, Massachusetts and has raised over $12 million dollars in venture capital, making it one of the most well-funded startups focused on building A.I. autonomous agents for the enterprise. The Talla team is led by Rob May (CEO), Catharina Mallet (COO), Byron Galbraith (Chief Data Scientist), and Jon Klein (Chief Architect), providing the company with decades of experience in software building, A.I., and data science.