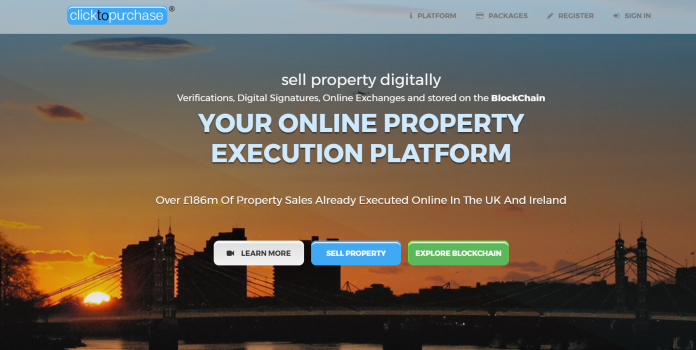 Clicktopurchase, the online execution platform for buying and selling property, has released the “clicktopurchase Blockchain”.

Unlike so many who have been talking about using the technology, the company has developed and released live its Blockchain in an extremely interesting development for the property industry.

In recent months, the interest in potentially bringing Blockchain technology to the property industry has been gaining momentum at a rapid pace.  Now it has arrived, for probably the most important thing in a property’s life cycle – its purchase.

The platform has developed a significant circa £175m track record for uniquely enabling a property transaction to be concluded quickly and easily, online. A verified bidder is able to submit an offer on behalf of a buyer, this generating an electronic offer with a legally binding electronic signature. If the offer is accepted, by the agent, solicitor or seller operating the dashboard, a second electronic signature is added and an instant online exchange of a property contract occurs.

Blockchain has been described as a technology which will change all our lives by enabling data to be held in an immutable ledger. By having totally reliable data, exchanges of information and transactions of any kind can occur quickly and easily, removing the many delays caused by intermediaries who are validating information.

“When you have purchased a property using clicktopurchase, you have absolute proof of the right to ownership. When you come to sell, a buyer can completely rely upon your record. Intermediaries will have a reduced role, solicitors will have less to check and it raises questions as to the future need for the Land Registry.” Neil Singer, CEO clicktopurchase

“We’re delighted to see clicktopurchase launch their property blockchain on MultiChain. As far as I’m aware, this is the first live blockchain implementation for the property market, and certainly the first to run on the MultiChain platform. We look forward to seeing the clicktopurchase application and network develop and thrive.” Dr Gideon Greenspan, CEO of Coin Sciences Ltd.

clicktopurchase has been inviting companies to take nodes in the Blockchain network and record data in the ledger.

“If you are interested to join us as we help change the property industry, keeping it relevant as technology changes all industries, we would like to hear from you,” added Singer.