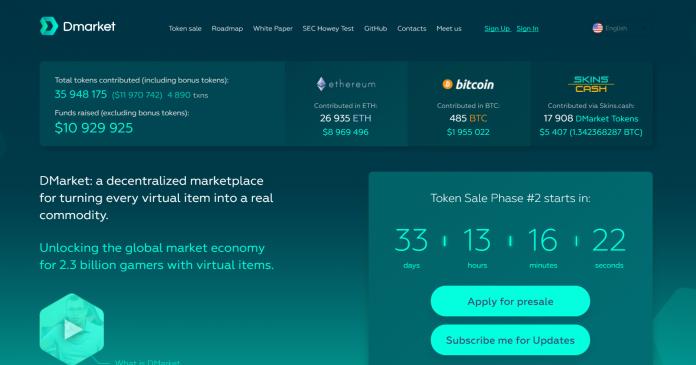 DMarket, a  global marketplace for trading in-game items has announced the dates of the company’s main token sale. According to CEO and founder of DMarket Volodymyr Panchenko, the second (main) phase of the token sale will start on November 3 and will continue through November 17. No further DMarket token sales will be launched after the end of phase two.

The exchange rate will be 750 tokens for 1 ETH. Minimum transaction amount is 0.1 ETH.

“We are ready to allocate 25,000,000 tokens (about $10 million) hard cap for presale; investors can apply for a whitelist now. The minimum transaction for presale is $50,000. The rest of the 75,000,000 token (around $30 million) hard cap will be available for crowd sale. According to our policy, there will be a limit of DMarket tokens sold to a single pair of hands. We want to spread DMarket tokens to as many investors and real gamers as possible,” Volodymyr Panchenko said.

Recently, DMarket raised $10.9 million in investment during the four-day token sale that took place in August 2017. The exchange rate was 1,000 DMarket tokens for 1 ETH.

The cross-game platform DMarket is based on Blockchain technology and smart contracts. DMarket’s alpha version (testnet) launches in October.

With DMarket tokens, 2.3 billion players from any game on any platform will be able to buy, sell, and exchange virtual items on the new marketplace.

The estimated in-game trading turnover is currently $4 billion, and it only works for a couple of games. The core issues that lock in-game item market development are technology and trading security. During every other trade, hundreds of thousands of databases from every game and every publisher have to be synchronized with each other. But the most important factor is that there is a risk of third-party interference in the trading process. DMarket resolved both issues with Blockchain technology. By offering an opportunity to buy and sell in-game assets to all gamers globally, DMarket creates a new in-game item economy worth more than $450 billion and turns virtual items into real assets with the help of Blockchain technology.

DMarket is supported by prominent game development studios, such as 4A Games (Metro 2033, Metro: Last Light), GSC Game World (S.T.A.L.K.E.R, Cossacks series), Tatem Games (Carnivores, Vivisector, Cryostatis), and the Pantera Capital investment fund. The company is negotiating with dozens of other world publishers to sign agreements in the near future.

Facebook
Twitter
Pinterest
WhatsApp
Previous articleDECENT Wins Big at the Central European Startup Awards
Next articleEtch ICO Wants to Revolutionise Payroll Platform – Boosted by KPMG Collaboration
Richard Kasteleinhttps://www.the-blockchain.com
In his 20s, he sailed around the world on small yachts and wrote a series of travel articles called, 'The Hitchhiker's Guide to the Seas' travelling by hitching rides on yachts (1989) in major travel and yachting publications. He currently lives in Groningen, the Netherlands where he has set down his anchor to raise a family and write. Founder and publisher of industry publication Blockchain News (EST 2015) and director of education company Blockchain Partners (Oracle Partner) – Vancouver native Richard Kastelein is an award-winning publisher, innovation executive and entrepreneur. He has written over 2500 articles on Blockchain technology and startups at Blockchain News and has also published in Harvard Business Review, Venturebeat, Wired, The Guardian and a number of other publications. Kastelein has an Honorary Ph.D. and is Chair Professor of Blockchain at China's first blockchain University in Nanchang at the Jiangxi Ahead Institute software and Technology. He has over a half a decade experience judging and rewarding some 1000+ innovation projects as an EU expert for the European Commission's SME Instrument programme as a startup assessor and as a startup judge for the UK government's Innovate UK division. Kastelein has spoken (keynotes & panels) on Blockchain technology at over 50 events in 30+ cities.