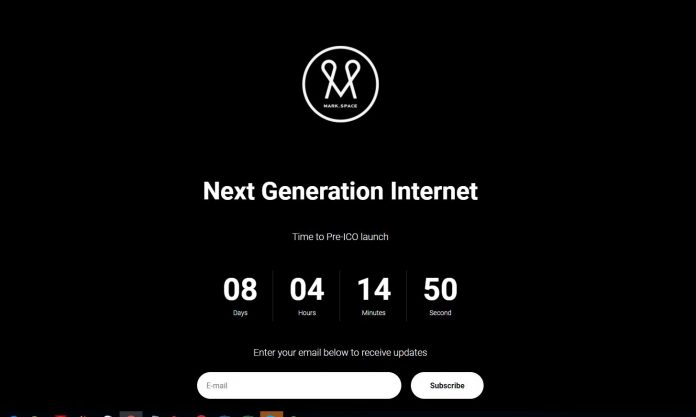 MARK.SPACE, a socioeconomic interaction platform that combines VR and Blockchain technologies has announced the dates of its upcoming ICO.

The platform’s Executive Team, which consists of successful entrepreneurs and developers with merited and internationally effective projects is excited to announce the upcoming Pre Initial Coin Offering (ICO).

MARK.SPACE is not a simple eco-system which allows for global interaction – the platform enables its users to apply real-life cases and business ideas, create new content and consume goods and services from the platform’s other users. MARK.SPACE integrates creative ideas with the most progressive technologies, such as Virtual Reality (VR), the Blockchain and smart contracts, and soon will operate on a uniquely architected decentralized platform.

Alliance of Trust and Technology

Virtual Reality is quickly becoming one of the hottest pieces of technology, already proving to appeal to large audiences, when pitched correctly. The VR software and hardware market size is expected to reach over $40bn USD by 2020 – an economic impact impossible not to notice.

Another – relatively recent – technological breakthrough came with the creation of the Blockchain, which has redefined transactions as a concept. By merging the openness of the internet with the security of cryptography, the Blockchain gave the world a faster, safer way to verify key information and establish trust.

By combining the best of both and supporting the VR-platform with a crypto-economy, MARK.SPACE created a technologically advanced virtual universe, allowing for decentralized transactions and 100% transparency.

Currently, there are many projects that attempt to combine VR and Blockchain technologies, with some of them even completing successful ICOs. MARK.SPACE, however, takes the synergy of the ideas to a whole new level.

Before MARK.SPACE, creating personalized VR projects (data clouds, shopping, gaming, etc.) was time consuming and expensive, and only possible with the assistance of professional developers. In the framework of the MARK.SPACE universe, each person or organization is able start their own VR/3D project, without knowing even the basics of programming, and do it fast and without notable costs.

In addition, to use MARK.SPACE, specially designed gadgets and costly equipment like Oculus, HTC Vive, VR-helmets and the like are optional, with no need to use powerful computers or to download special Apps. The only thing required from users is one of their existing gadgets – PCs, tablets or smartphones, and an internet connection. This user-friendly interface significantly broadens the reached audience of VR-project users.

Moreover, all MARK.SPACE areas will have their own web address, which means users may connect them to a domain of their choice – people will be able to visit spaces directly, without even knowing they just entered a part of an entire VR-universe.

To add to the list of how different and technologically advanced MARK.SPACE is compared to other VR-projects, one has to mention the technological readiness of the platform even before the start of the ICO, which can already be experienced by visiting the demo.

MARK.SPACE will launch a multi-phase crowdsale, with a very generous token-discount in its first stage. The MRK token, which is a utility token, will be valid for use only within the MARK.SPACE platform.

Investors of the ICO, starting November 21, 2017 and closing December 21, 2017, will enjoy reduction rates of 20%, 10%, 5%, respectively, with the same minimum and maximum investment amounts as during the pre-ICO.

Following a successful ICO, MRK Tokens will be placed on participating exchanges, thus enabling users to move around their MRK tokens smoothly. With a soft cap limit of 15 000 ETH, the ICO hard cap of the project is 300 000 ETH.