Home News Coinme Announces the Start of the UpToken Sale Today With Over $40... 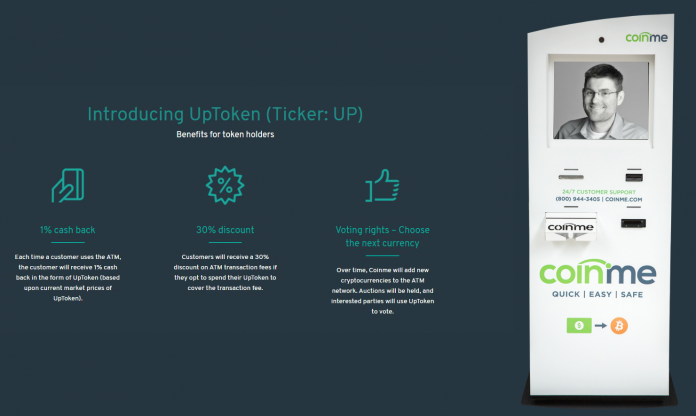 Coinme, a venture-backed crypto financial services and blockchain technology company, will begin its UpToken crowd sale today at or around 15:00 GMT (8:00 a.m. PDT), offering a new crypto asset to help accelerate the deployment of the largest crypto ATM network in the world. There is no pre-sale, and the sale will be open to the public from the start.

UpToken was designed in partnership with J.R. Willett, who invented the token sale in 2013 with the launch of Mastercoin (now called Omni). Since J.R.’s pioneering launch, token sales have since generated more than $2 billion for blockchain technology companies. To date, pre-registrations for UpToken exceed $40 million USD.

Bitcoin has recently hit record highs, hitting an all-time high of $5,800 per Bitcoin, creating a market cap of nearly $100B, but while demand soars, still only a fraction of the world population has access to the revolutionary currency.

“Nine years after the creation of the first Bitcoin, there are still less than 20 million people who own Bitcoin. Compared to the more than 7 billion people in the world who could benefit from Bitcoin and other digital currencies, it’s clear we still have a long way to go,” said Neil Bergquist, Coinme co-founder and CEO. “The lack of user-friendly access to crypto is a major barrier to global adoption. With UpToken we plan to accelerate the deployment of a global crypto ATM network and help virtual currency ‘cross the chasm’ to become adopted by the masses. This includes giving access to the 2 billion people in the world who are unbanked and don’t even have access to basic financial services.”

While there are now more than 3 million traditional ATMs in use today, there are only 1,700 crypto ATMs deployed worldwide. For example, according to Coin ATM Radar, the entire continent of South America has less than 10 crypto ATMs. Even a developed economy such as Japan, with 129 million people and one of the world’s most active Bitcoin user bases, still has less than 20 crypto ATMs. UpToken seeks to change this by deploying thousands of crypto ATMs before the end of 2018, with 10,000 ATMs being deployed worldwide in less than 5 years.

Coinme first made headlines in 2014 as the first licensed Bitcoin ATM company in the United States. Since then, Coinme’s ability to humanize blockchain technology and to offer a seamless user experience has brought thousands into the growing crypto community. Coinme has learned that mainstream crypto users prefer a familiar ATM experience they can trust. Having written their own wallet and ATM software, Coinme’s user experience is unparalleled and allows users to buy Bitcoin and other virtual currencies instantly without having to deal with the headache of private keys and public wallet addresses.

The company’s ATMs currently handle about $100k in transactions per ATM per month, and now that the ATM hardware and software is developed and validated by thousands of customers, Coinme is ready to build a global network of crypto ATMs across both the developed and developing worlds.

UpToken is considered a rewards-based token and will offer purchasers the following benefits:

Starting today, buyers can register and purchase UpToken at www.uptoken.org.

Facebook
Twitter
Pinterest
WhatsApp
Previous articleBlockbid Announces Launch Of ICO Backed By Multi-Cryptocurrency Trading Platform
Next articleBLOCKv Partners with Storj Labs to Provide Decentralized Storage Architecture and New Toolsets to Power Next Generation Digital Objects
Richard Kasteleinhttps://www.the-blockchain.com
In his 20s, he sailed around the world on small yachts and wrote a series of travel articles called, 'The Hitchhiker's Guide to the Seas' travelling by hitching rides on yachts (1989) in major travel and yachting publications. He currently lives in Groningen, the Netherlands where he has set down his anchor to raise a family and write. Founder and publisher of industry publication Blockchain News (EST 2015) and director of education company Blockchain Partners (Oracle Partner) – Vancouver native Richard Kastelein is an award-winning publisher, innovation executive and entrepreneur. He has written over 2500 articles on Blockchain technology and startups at Blockchain News and has also published in Harvard Business Review, Venturebeat, Wired, The Guardian and a number of other publications. Kastelein has an Honorary Ph.D. and is Chair Professor of Blockchain at China's first blockchain University in Nanchang at the Jiangxi Ahead Institute software and Technology. He has over a half a decade experience judging and rewarding some 1000+ innovation projects as an EU expert for the European Commission's SME Instrument programme as a startup assessor and as a startup judge for the UK government's Innovate UK division. Kastelein has spoken (keynotes & panels) on Blockchain technology at over 50 events in 30+ cities.