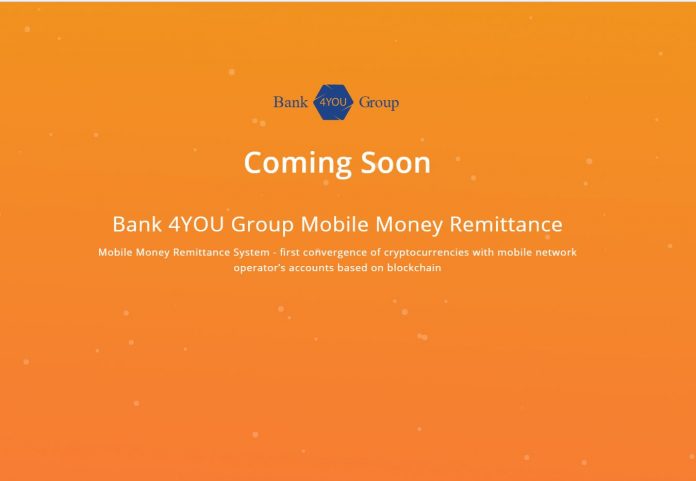 Bank4YOU Group will launch an ICO campaign in the last week of October in order to accelerate the goal of scaling its service rollout across Africa, Asia, and Latin America.

An indicative estimate for the total funding requirement is $50 million, which can be used to support the company’s expansion into new markets and to develop enhanced services (including consumer micro-loans and incorporation of Bitcoin or another cryptocurrencies within its money transfer services).

“The World Bank estimates that two billion people are without access to formal financial services with more than 50 per cent of adults in the poorest households being unbanked.”

“As a company, we recognize that financial inclusion is the main point to reducing poverty and boosting prosperity. With our new Blockchain-enabled Mobile Money Remittance Service (MMRS) we intend to play a very active part in making this happen.” Agar will present the demo version of the product at Finovate Asia 2017 in Hong Kong during the ICO campaign.

According to Bank4YOU Group board, the project’s originality is concentrated in the Blockchain technology, the structured chain of data within the decentralized platform. The ICO’s purpose is the development of the MMRS, which is the first convergence of cryptocurrencies with mobile network operator accounts.

The company aims to develop an innovative electronic payment system, which would enable:

The ICO campaign will begin on 26 October and end on 16 December, 2017. Within this project, the company will issue 300.000.000 BFY tokens of Bank4YOU Group. The referral program, along with the bonus system, can be found on the company’s ICO website (www.bank4you.io).

Established in 2013 and headquartered in London, UK, in 2016, Bank4YOU transformed into Bank4YOU Group, an international consortium of fin-tech service companies operating within the electronic mobile payment services arena. FCA License No715451, issued by the UK’s Financial Conduct Authority authorizes Bank4YOU to provide credit.

Facebook
Twitter
Pinterest
WhatsApp
Previous articleLive Pre-sale of Trive: Fights Fake News Using Cryptocurrency and Crowdsourced Research
Next articleSwissborg – The Blockchain Era of Swiss Private Banking – Announced ICO
Richard Kasteleinhttps://www.the-blockchain.com
In his 20s, he sailed around the world on small yachts and wrote a series of travel articles called, 'The Hitchhiker's Guide to the Seas' travelling by hitching rides on yachts (1989) in major travel and yachting publications. He currently lives in Groningen, the Netherlands where he has set down his anchor to raise a family and write. Founder and publisher of industry publication Blockchain News (EST 2015) and director of education company Blockchain Partners (Oracle Partner) – Vancouver native Richard Kastelein is an award-winning publisher, innovation executive and entrepreneur. He has written over 2500 articles on Blockchain technology and startups at Blockchain News and has also published in Harvard Business Review, Venturebeat, Wired, The Guardian and a number of other publications. Kastelein has an Honorary Ph.D. and is Chair Professor of Blockchain at China's first blockchain University in Nanchang at the Jiangxi Ahead Institute software and Technology. He has over a half a decade experience judging and rewarding some 1000+ innovation projects as an EU expert for the European Commission's SME Instrument programme as a startup assessor and as a startup judge for the UK government's Innovate UK division. Kastelein has spoken (keynotes & panels) on Blockchain technology at over 50 events in 30+ cities.