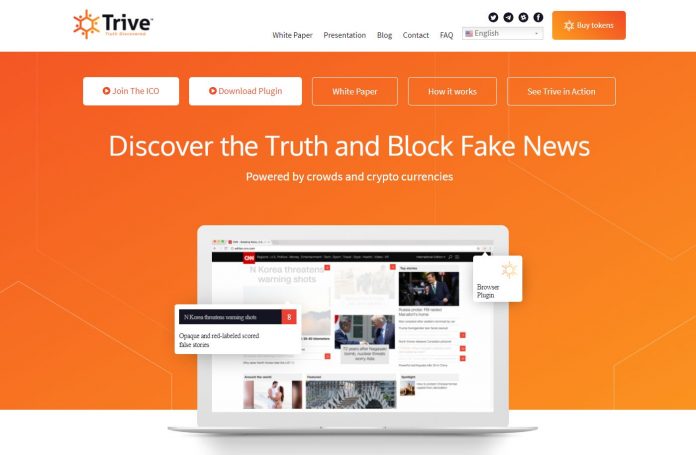 Truth in the news is critical, and people all over the world have been seeking to ensure that the content they’re consuming is of high quality. The rise of fake news is familiar to many, and past initiatives thus far to address the problem have been encouraging but inadequate.

Zero hour is approaching with the emergence of Trive, a revolutionary mission to shed much-needed light on truth by exposing fake news and misleading content through incentivized crowdsourcing powered by Cryptocurrency. The team at Trive have created a pioneering method that is superior to all other fact-checking initiatives, and your chance to be part of this important mission begins now.

Effective immediately, the Trive pre-sale is officially live. Until October 31, Trive Tokens can be purchased at a 30 percent discount. The token sale can be found here.

Trive’s Pre-ICO, according to the team,  is an opportunity to become part of a revolution in media – one that will transform how people browse the web and empower individuals to effectively combat inaccurate or deceptive content.

“With Trive, people will be emboldened to share a clear and virtuous voice in what is distributed each and every day,” said David Mondrus, founder and CEO of Trive. “Trive will serve to strengthen the integrity of the journalistic process and make sure the truth remains free, spoken, and visible in a world that has been filled with misinformation.”

Facebook
Twitter
Pinterest
WhatsApp
Previous articleA New Ozone Layer? Arcona Plans for Augmented Reality Layer to Cover Earth Surface in new AR project
Next articleBank4YOU Group’s launches ICO end of October – Investors Call to Action
Richard Kasteleinhttps://www.the-blockchain.com
In his 20s, he sailed around the world on small yachts and wrote a series of travel articles called, 'The Hitchhiker's Guide to the Seas' travelling by hitching rides on yachts (1989) in major travel and yachting publications. He currently lives in Groningen, the Netherlands where he has set down his anchor to raise a family and write. Founder and publisher of industry publication Blockchain News (EST 2015) and director of education company Blockchain Partners (Oracle Partner) – Vancouver native Richard Kastelein is an award-winning publisher, innovation executive and entrepreneur. He has written over 2500 articles on Blockchain technology and startups at Blockchain News and has also published in Harvard Business Review, Venturebeat, Wired, The Guardian and a number of other publications. Kastelein has an Honorary Ph.D. and is Chair Professor of Blockchain at China's first blockchain University in Nanchang at the Jiangxi Ahead Institute software and Technology. He has over a half a decade experience judging and rewarding some 1000+ innovation projects as an EU expert for the European Commission's SME Instrument programme as a startup assessor and as a startup judge for the UK government's Innovate UK division. Kastelein has spoken (keynotes & panels) on Blockchain technology at over 50 events in 30+ cities.