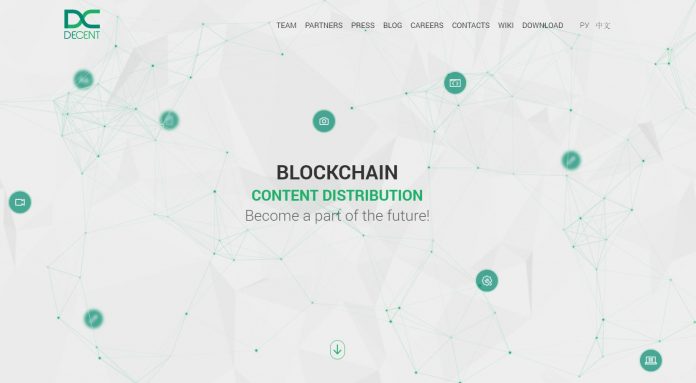 DECENT has released the beta launch of its DECENT GO marketplace, a decentralized digital marketplace. The Beta version is being launched to gain feedback from industry professionals. DECENT had previously launched their desktop application for DECENT GO at the end of June and are now thrilled with the addition of marketplace functionality.

As the distribution is via a peer to peer Blockchain network – and does not rely on third parties – authors have the ability to upload their own content, assign it to a category, write a description of the content, choose its lifetime duration, and allocate its price and IP rights themselves. The fee for each transaction is transferred fairly and almost instantly to the artist’s account after each transaction; artists will no longer have to wait months before seeing a penny from their work.

In addition to DECENT GO wallet functionality they are launching digital distribution via Digital Content Token (hereinafter referred to as “DCT”) within their marketplace. The first 400 users who create their account on DECENT GO will receive 2,5 DCT in their wallet so that they can begin trying the platform, uploading content, choosing seeders, downloading content and reporting bugs. This will provide relevant feedback so DECENT can continue moving forward with development.

“DECENT GO will help content producers overcome many of the issues they face nowadays in the entertainment and media industry”, said Matej Michalko, DECENT Founder and CEO. “There is too much artificial complexity and too many barriers in the industry affecting both the access to market and income of the content owners”.

The entertainment and media market is huge but it remains very tough for artists. DECENT estimates that writers lose over 30-75% of their profits when publishing with Amazon. Similarly, a musician loses around 30% when they sell a track on iTunes. DECENT GO offers an alternative model which puts profits directly in the accounts of content creators with the elimination of third-parties and middleman fees. This could free up a huge chunk of spending in the global media and content distribution industry; the current level of spending is estimated to grow from $1.7 trillion in 2016 to over $2 trillion in 2019.

“The majority of the power”, added Michalko, “is concentrated in the hands of a few players controlling the industry. As a result, artists, filmmakers and writers lose money and control over their work. We designed the DECENT GO marketplace to do away with these issues and bring more transparency and fairness to the digital content industry.”