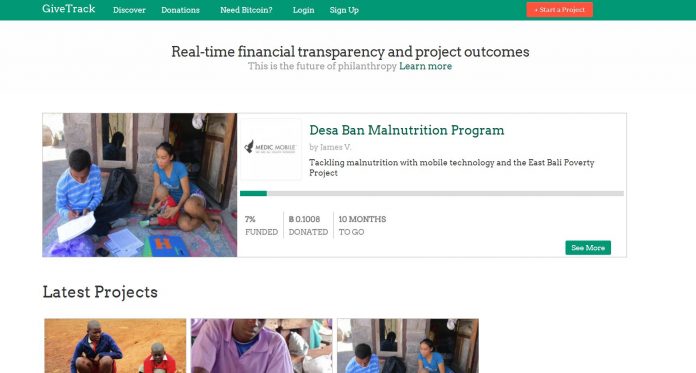 BitGive, the first Bitcoin 501(c)(3) nonprofit, today announced that the beta version of its donation tracking platform, GiveTrack, is officially live. GiveTrack offers unprecedented transparency in the donation process, giving donors the ability to transfer, track, and provide a permanent record of the route of global financial transactions from inception to endpoint. GiveTrack also provides individual donors with direct evidence-based outcomes for their donations, empowering them to give more. The GiveTrack beta will be unveiled through a demonstration at the Money20/20 Conference in Las Vegas, the world’s largest payments and financial services innovation event.

“We are delighted to finally unveil a working version of GiveTrack to our community after months of hard work. Donors now have more opportunities to engage with BitGive’s core mission to leverage the power of Bitcoin and blockchain technology to improve public health and the environment worldwide. By releasing GiveTrack, BitGive is utilizing the unique benefits these advanced technologies have to offer – like unparalleled transparency and security – to enhance and revolutionize the donation process. Furthermore, individuals can build more trust with charitable organizations by knowing how their funds are used to drive impact on the ground. In doing so, we hope to increase charitable giving to create a global movement towards philanthropy,” said Connie Gallippi, Founder of BitGive.

GiveTrack offers a unique solution to the challenge of transparency that many nonprofits have historically faced. By leveraging blockchain technology, GiveTrack provides an unprecedented level of clarity in the donation to deployment phases of allocated funds. Individuals are able to trace the path of their charitable donations on a public platform in real-time, allowing them to see exactly how funds are spent and when they reach their final destination. Charity project results are also shared with the donor to create direct engagement.

“GiveTrack empowers nonprofit donors to track their charitable dollars in action, allowing people to more intimately connect to the nonprofit organizations they support, and catalyzing an excitement to give in a new generation of impact-minded donors – Millennials and Gen Z professionals (Kickstarter contemporaries) – who are keen to follow along with the development of projects they support.”

In a related announcement, GiveTrack will be piloting two new projects with long-standing nonprofit partners, Medic Mobile and The Water Project. Both projects will be available on the newly unveiled GiveTrack website, giving individuals the opportunity to donate to the projects using the platform.

The first project is with Medic Mobile, a nonprofit organization that develops mobile and web tools to help community health workers, clinics, and families communicate to improve healthcare access in hard-to-reach communities. Medic Mobile is working to support the East Bali Poverty Project to assist health workers in monitoring and facilitating timely treatment for malnourished children through the creation of a mobile application. The app will help community health workers calculate and utilize height and weight data to improve care coordination for malnutrition in Desa Ban, Bali.

“Through the long-term partnership with BitGive, Medic Mobile hopes to realize the potential of blockchain technology, which offers transparency, auditability, and efficiency. With GiveTrack helping to raise donors’ expectations for transparency, charitable organizations will be fully accountable for every dollar or bitcoin received, ensuring funds aren't wrongly allocated.”

The GiveTrack platform will also be supporting The Chandolo Primary School Water Project, with the mission to provide a new rain catchment tank, latrines, and sanitation training to the Kenyan school. This will dramatically improve the health of the students by improving water quality and hygiene, while also increasing opportunities for learning. Previously, BitGive partnered with The Water Project to raise funds for a water well at the Shisango Girls School in Western Kenya.

Peter Chasse, President and Founder of The Water Project, who worked closely with BitGive in its early days, said:

“We recognized early on, alongside BitGive, that the blockchain provides a whole new way to allow confidence-inspiring real-time auditing of how organizations like ours spend the public’s donations. GiveTrack will allow charities to prove, in an approachable way, what they’ve been doing all along, namely providing sustainable, cost-effective solutions to people who need them most.”

Since its founding in 2013, BitGive has partnered with international relief efforts and local charities seeking to create better communities, creating global campaigns to encourage charitable giving via bitcoin. Initial backers of GiveTrack include the Walter and Karla Goldschmidt Foundation, Matthew Roszak (Bloq), Rodolfo Andragnes (Bitcoin Argentina), CoinFabrik, and Rocelo Lopes, among many others supporting BitGive’s mission.

The GiveTrack site will go live today and is available at https://givetrack.org/.