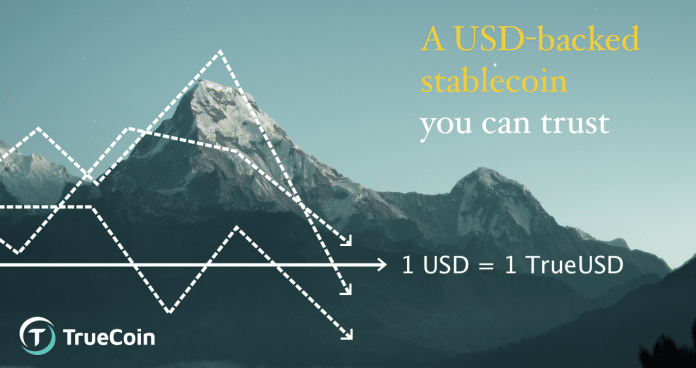 “We believe TrueUSD will provide a long-awaited, stable trading instrument for cryptocurrency traders, and enables consumers and businesses to use a cryptocurrency as a medium of exchange,” the company stated.

With the price volatility of cryptocurrencies, most businesses still find them impractical to use in the mainstream economy, and this prevents their widespread adoption, according to the company’s statement. In the decentralized economy, many decentralized applications will be difficult or impossible without a basic medium-of-exchange token, it states.

Starting with USD, the company says that it plans to extend its model to other fiat currencies, such as the Euro and Yen, as well as precious metals like gold and diamonds. Other assets like stocks and real estate could follow, it says.

It states that it plans to present price deviations with USD as an opportunity for arbitrage and will make TrueUSD available on multiple exchanges, with an announcement expected by the end of February.

TrueUSD was developed by TrueCoin using its TrustToken platform. The TrueCoin team are alumni of Stanford, UC Berkeley, Palantir, and Google; backers include Founders Fund Angel, Stanford-StartX, FJ Labs, 1kx, and Blocktower Capital, according to the company’s website. The service’s legal framework for collateralized cryptocurrencies was developed in collaboration with WilmerHale and Arnold & Porter, and has a network of fiduciary, compliance, and banking partners.

“I’ve eagerly awaited the launch of a transparent and regulatory compliant stablecoin,” commented Ari Paul, co-founder of BlockTower Capital. “TrueUSD will make it easier for BlockTower to trade cryptocurrency across exchanges. BlockTower are proud investors in and advisers to TrustToken. We’re likely to also be early users of their ‘killer app’ collateralized stablecoin, TrueUSD.”