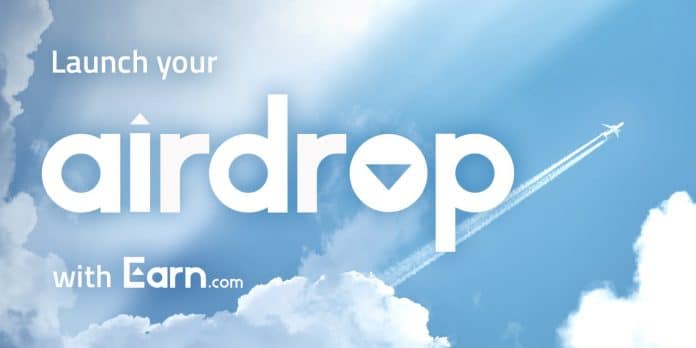 Earn.com, which enables users to earn digital currency for answering emails and completing tasks, last week launched a new project: Airdrops, described on the company's website as a way for blockchain entrepreneurs to give users a free trial of a new token and thus gain early adopters. Verified Earn.com users who opt in will receive messages about new blockchain projects, the opportunity to claim free digital assets and have tokens transferred to their wallets.

Watch out for the first Earn.com Airdrop, due at the end of January and featuring CanYa, a blockchain powered digital marketplace for services. Earn.com states that it's also planning drops for Bloom Token, a blockchain risk assessment and credit scoring platform, BEE Token, a decentralized ecosystem for the sharing economy and Vezt, a platform for recording song ownership and distributing sections or samples to fans, friends, rights-buyers and brands.

Entrepreneurs can use Airdrops to simply give away new tokens, or they can require early adopters to earn them by doing various tasks, such as inviting other users to the platform.

To date, according to its website, Earn.com has helped over 100 projects — including Simple Token, EtherParty, Datum, Blockstack, and Icon — connect new customers with their coins and tokens. Projects that have partnered with the company have gone on to sell more than USD 750 million in digital assets, it claims.

“Blockchain entrepreneurs benefit from Airdrops because they can now simply pay to acquire huge numbers of cryptocurrency early adopters, including many influential angel investors, VCs, CEOs, and blockchain personalities,” said the company in its statement. “And Earn.com users benefit because they get early access to some of the most interesting tokens without paying anything at all.”

Earn.com was previously known as 21 Inc, a maker of Bitcoin mining hardware. The company rebranded last year to emphasize its new focus on using cryptocurrency to power a social network.

Republic Partners with Althea to Launch First-Ever Compliant Security Airdrop for Retail Investors in the U.S. and Abroad

Blockstack Files with SEC for Reg A+ Token Offering