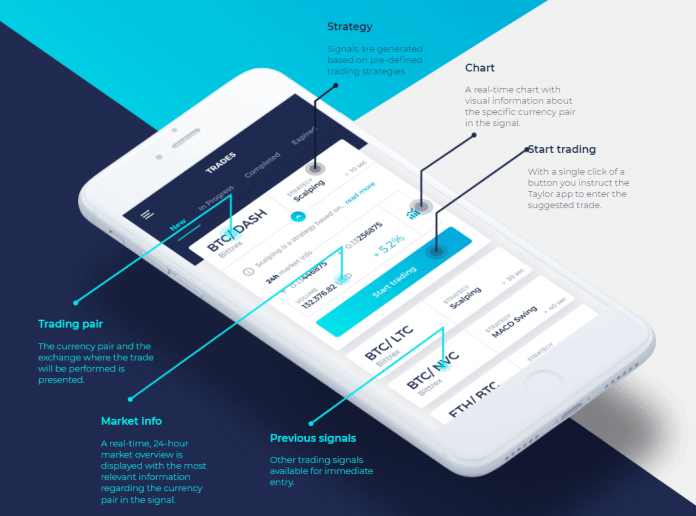 The crypto trading mobile app, Taylor announced on Monday the TAY token ICO, following a successful private sale raising over ETH 500. Taylor aims to reduce barriers to entry for cryptocurrency trading — such as the time it takes to research and monitor investments — by signaling potential possibilities to invest, tracking prices and bringing the simplicity of a user-friendly mobile app to the process of buying and selling cryptocurrency assets. Using these tools, Taylor hopes to usher in a new wave of crypto enthusiasts.

Taylor Co-Founder and CEO, Fabio Seixas wrote in a Medium post, “[Taylor is] an app designed to do the hard and tedious work for you. It’s a trading automation tool, that will monitor hundreds of markets in real time and signal the most attractive investment opportunities. Once a trade is entered, the app will closely monitor it, looking for the ideal exiting position, either for profit or user investment protection.”

Taylor’s token sale opened Feb 21 and will run through March 22, with a soft cap of ETH 500 and an individual limit of ETH 50 per person, to prevent the accumulation and manipulation of TAY tokens by powerful actors, says the statement. Participants in the TAY token sale will need to sign up for the whitelist and prove that they reside outside countries banned from investing in the ICO, including the United States, South Korea, Singapore, and Canada. Accredited investors from the United States can still join the crowdsale. 6,535,000 TAY tokens will be available for purchase during the public crowdsale event, with an initial price of 0.0007 ETH per token.

To learn more about Taylor and its upcoming crowdsale, visit https://smarttaylor.io/