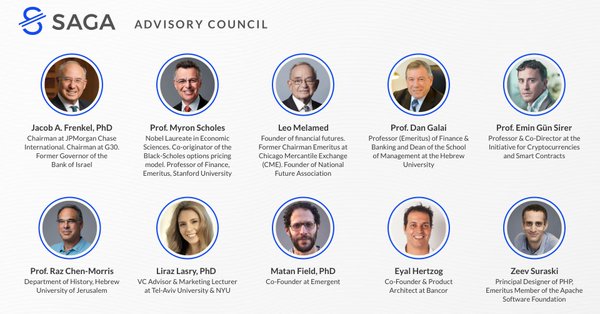 Backed up by a swathe of high-profile investors, including the Chairman of JPMorgan Chase, the Saga Foundation on Thursday unveiled its vision of a non-anonymous, blockchain-based digital currency, /SGA, to address policymakers’ concerns over cryptocurrencies’ anonymity, volatility and lack of underlying value. However, the Financial Times, (paywall) today accused Saga of playing it safe; of not providing adequate justification for the existence of its cryptocurrency (a symptom, it says, common to the wider crypto industry), and of making too much of its non-anonymous nature.

In a statement, Swiss-based Saga said that, instead of an initial coin offering (ICO), the project is being financed by a USD 30 million seed round, supported by accredited investors, VC’s and hedge funds, including Mangrove Capital Partners, Lightspeed Venture Partners, the Singulariteam Technology Group and Initial Capital.

The non-profit also stated that the currency is designed with a tamed volatility mechanism, to set the ground for it to become a store of value and a medium of exchange. For this reason, Saga is backed by a variable fractional reserve that is anchored to the IMF’s SDR – an international reserve asset, created by the IMF in 1969 to supplement its member countries’ official reserves. These reserves will be deposited with regulated banks through algorithms in the underlying Smart Contract System, according to the statement.

Saga holders must satisfy full KYC (Know Your Customer) qualification and AML (Anti Money Laundering) requirements under Swiss law, resolving, according to the non-profit, concerns about participant accountability, an issue that is generally raised regarding cryptographic currencies.

Project advisor, Jacob Frenkel, the Israeli economist and chairman of JP Morgan Chase International and the G30 stated: “While Blockchain technologies have gained growing acceptance, encryptic currencies have raised public policy concerns, since they are anonymous, unbacked, and are highly volatile. I share these concerns and see great value in Saga’s vision to address them properly.”