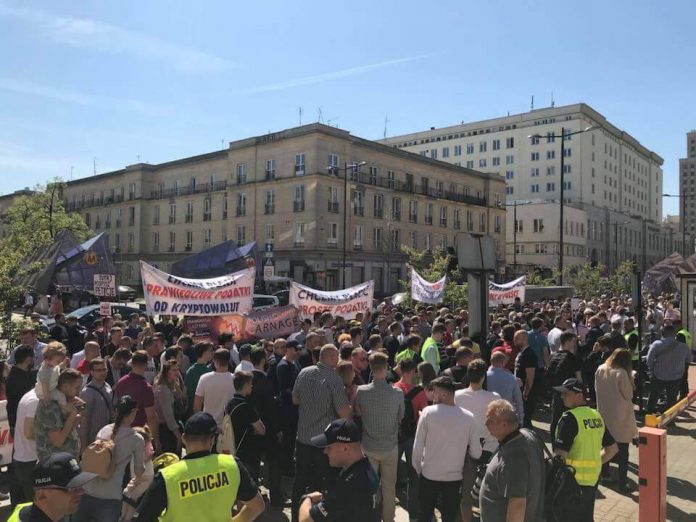 Thousands of people turned out on the streets of Poland’s capital Warsaw on Friday to protest a hefty tax which authorities sought to impose on cryptocurrency transactions. Their protest was not in vain and the crippling tax law was partially overturned, but not before it had sparked a worldwide wave of sympathy among crypto enthusiasts and its very own revolutionary token.

Earlier this month, the Polish Ministry of Finance published controversial new laws regarding the taxation of cryptocurrency. The law stipulated that every single cryptocurrency transaction was to be subject to a one percent tax, to be paid within 14 days of its occurrence. With the Polish tax deadline falling on April 30, it also left less than a month for crypto traders to comply with the new directive.

This is a nation that’s no stranger to protest, having given birth to the legendary Solidarność movement, which — in the 1980’s — paid no small part in bringing the county out of the Soviet Union. So it’s unsurprising that the introduction of the so-called PCC tax generated a strong backlash by the Polish crypto community, who felt that the taxes were unduly harsh and would suppress investment and negate any progress that has been made.

Protestors were quickly mobilized and spearheaded by well-known Polish blockchain YouTuber Szczepan Bentyn. Bentyn is the CEO of Pracownia Nowych Technologii (New Technology Lab) and is considered by many to be the Elon Musk of Poland.

Bentyn hit on a possible solution: to tokenise the protest. He issued a protest token, PCC, named after the new tax law and with the aim of undermining the Polish government and making a mockery of its crypto legislation. The token acquires its value from the effort taken to fill out and submit the PCC application form and is considered to be a symbol of the resistance of the people to the new cryptocurrency laws.

“[Our] ultimate goal was to collect all available paper PCC forms, incentivizing people with the token,” he explained in correspondence with Blockchain News. “The newly-issued token isn’t supposed to be a speculative tool but rather a community token. Even though this token is supposed to be “worthless” [after the PCC was revoked] we can use it in the future in many ways like voting, tickets or use leftover tokens for an ICO of a future political campaign. Why not?”

Seemingly, this is the first time that a cryptocurrency is being used in this capacity. A revolutionary concept for a revolution, the token has provided Polish crypto traders with an opportunity to make their voices heard and without the need for any violence.

‘The protest and token was a spontaneous movement which turned out to be very fruitful for our community,” explained Bentyn. “New organizations were established, new leaders showed up and the community consolidated as a whole.”

It also appears to have consolidated the global community, with many expressing sympathy for the Polish cause and calling for worldwide reform of tax laws in relation to cryptocurrency.

“No matter what country you’re in we should be helping the Polish citizens fight this. We may all be in different countries but we’re all under the same cryptocurrency total market cap. The easier it is for citizens of any country to invest the better it is for all of us. There needs to be some sort of universal cryptocurrency tax reform coalition that goes apeshit anytime a country tries to pull something like this.”

Tax laws throughout the world differ wildly in their approach to cryptocurrencies.

According to the Financial Times (paywall), in the US, the Internal Revenue Service has said that virtual currencies should be treated the same as property and are thus liable for capital gains tax.

Meanwhile, in the UK, a capital gains tax rate of up to 20 percent is payable on cryptocurrency profits when they have been held as investments. However, some advisers say there is confusion because of fairly recent guidance from HM Revenue & Customs suggesting that a transaction might be “so highly speculative” that, like gambling, wins would not be taxed.

There are, of course, those who choose not to declare their taxes. In the US, between 2013-15 tax authorities noted that only “800-900” people a year filed forms that included a bitcoin-related liability.

In Finland, however, they’re one step ahead:  tax authorities say they have identified about 3,300 Finns who owe taxes on their cryptocurrency transactions by using blockchain analysis.

And for those thinking the Poles will now be able to trade tax-free, Bentyn had this to add:

“During today’s protest, the Ministry of Finance revoked this interpretation, so we don’t need to pay PCC tax. Which is a huge success for the Polish community. But it doesn’t solve the issue with crypto-crypto income tax. We still need to report and pay income tax (18/32 percent or 19 percent for business) from every crypto-to-crypto transaction.”

Legislators may need to move swiftly to reform outdated concepts of taxation as they relate to cryptocurrencies. They will also need to factor in new, tokenized forms of protest. A space to watch.