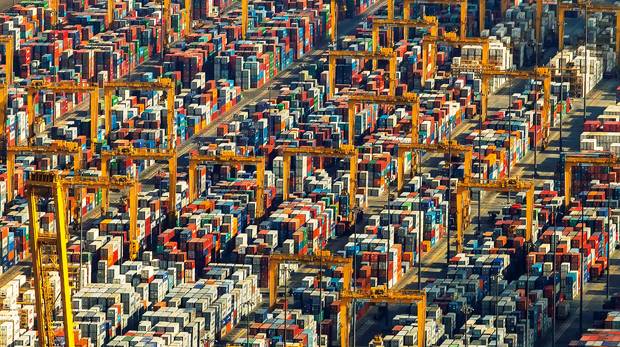 The Dubai Multi Commodities Center (DMCC) released on Wednesday the results of newly commissioned research on the future of global trade, examining the ways advances in blockchain technology and finance will shape the shipping industry over the next decade.

Research was conducted by the Centre for Economics and Business Research, bringing together the collective thinking of 250 global industrial leaders and experts across commodities trading hubs in London, Zurich, Dubai, Singapore, Johannesburg and Hong Kong. Of particular note is the finding that paperwork costs alone make up 20 percent of an estimated USD 1.8 trillion global trade market – a cost ripe for reduction through the implementation of blockchain tech.

A DMCC statement outlined the changing landscape: “Global trade and trade finance are at the cusp of a digital revolution driven by Fintech and Blockchain, and at the same time, the world’s economic centre of gravity is shifting towards Asia with new manufacturing hubs emerging. Geopolitical factors continue to challenge traditional trade flows and associated tariffs. From the US election, to the UK’s Brexit through to China’s Belt and Road mega project, change is definitely on the horizon… Blockchain is seen as a game changer for the tracking of goods and shipment as well as improving trade finance. By providing a secure, decentralised record of transactions, a large degree of paper-based documentation would be eliminated resulting in simpler, automated workflows, smart contracts and cost reductions.”

The researchers believe that, with over 85 million labor-intensive jobs expected to shift away from China between 2016 and 2030, countries like Vietnam, Mexico, Myanmar, India, Indonesia, and Kenya are likely to experience some of the same economic benefits (and costs) of an increased manufacturing presence that has powered China for the past 30 years. Implementations of blockchain tech along with geographic shifts in manufacturing to manage costs could increase global GDP by an estimated 5 percent, and global trade volumes by up to 15 percent.

According to the report, due to strict collateral requirements and credit history checks, 50 percent of SME funding applications are rejected by banks, leading to a huge increase in alternative financing in recent years. The Asia-Pacific region leads the alternative financing charge with over USD 245 billion raised, compared to USD 73 billion collected across Europe and followed by North, South, and Central American financing activities that have raised a mere USD 35 billion between 2015 and 2016.

The researchers expect that the sustainable packaging market will reach a total value of USD 203 billion by 2021: “With the decline of natural resources and the rise of social responsibility, consumers are increasingly demanding ethically sourced and environmentally friendly goods. Sustainable supply chains can reduce the impact on the environment as well as unlock opportunities to improve operational efficiencies. As governments around the world enforce energy and resource efficiency policies; sustainable business practices will have the competitive advantage in years to come.”

Dubai Wants to Clone Crypto Valley in the Desert