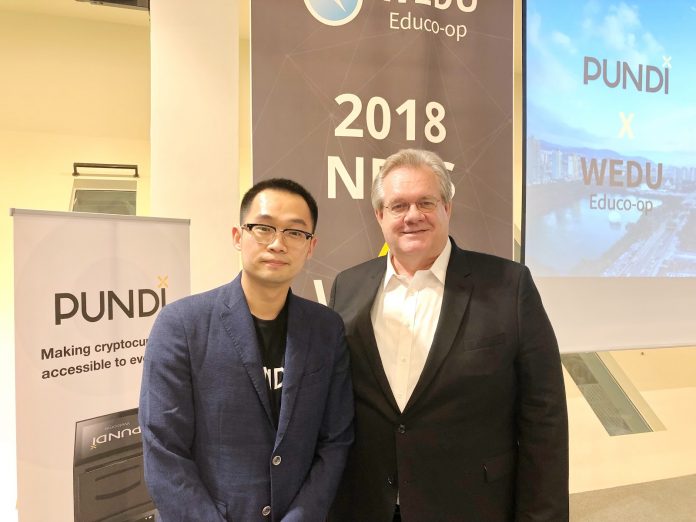 Pundi X, the Asian blockchain point of sale solution provider, on Tuesday announced a partnership with the American Chamber of Commerce Korea (AMCHAM) to promote its terminals to AMCHAM members, including US multinationals like Aston Martin and McDonalds.

Under the terms of the Memorandum of Understanding, AMCHAM will agree to support, introduce and promote the Pundi X blockchain solution to its 1,800 members in support of its deployment and adoption in Korea.

The partnership was announced during the first display of the new Pundi XPOS terminal in Seoul. XPOS point of sale solutions will allow retail stores to conduct blockchain-based transactions in multiple cryptocurrencies, says Pundi X.

Korea is one of four countries where Pundi X will, next month, begin to ship pre-orders for its new XPOS device, which carries support for credit and debit card payments as well as multiple cryptocurrency transactions.

“Korea is a key market for the deployment of cryptocurrencies and, it of course follows, for Pundi X,” said Danny Lim, the company’s co-founder and Chief Financial Officer in a statement. “We are very pleased by the level of interest shown by Korean merchants and consumers. But we are confident that, with the backing of an organization with as many links to global business as AMCHAM and strategic counsel from our key advisor Jeffrey Jones, that this development will be an important milestone, not just for our presence in Korea but globally, too.”

Jones is a senior advisor to Pundi X and the Chair of the Board of Directors at the American Chamber of Commerce in Korea. He has been recognized by the Korean government for his contribution to the development of business in the country, the press release stated.

Pundi X is starting to roll out its terminals in four countries and in April said it would buy back its /NPXS tokens, following higher than expected demand for its retail product.