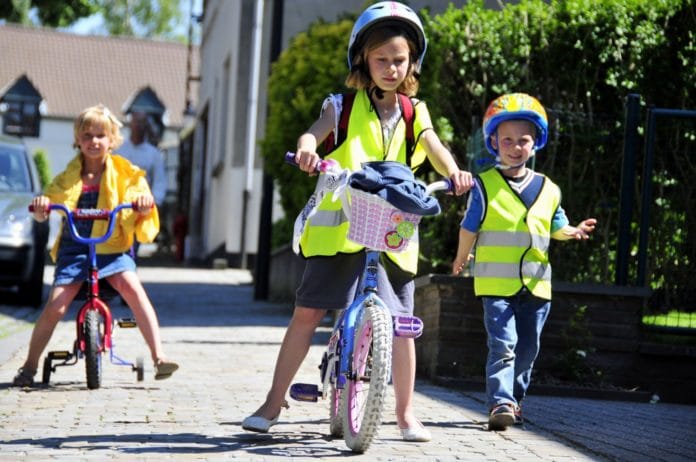 A new digital platform will enable school children of municipal schools in Bonheiden, to collect ‘digital currency’ each time they walk or cycle to school. The earned ‘currency’ can then be used at the fair, at the swimming pool or with local partners. This unique reward system was thought-out to encourage children to improve they own living environment. Other than earning the digital currency, the children's efforts contribute to better mobility and improved air quality in the areas around their schools.

The platform is a joint- creation from The Studio, the innovative lab at Belfius, and the Belgian IT company, Flow Pilots, which builds digital solutions for future governments. The system uses blockchain technology, which guarantees the privacy and integrity of the data. A dashboard enables the participating schools and local authorities to see how many kilometers the children have covered and the quantity of C02 emissions avoided as a result. The launch of this digital application is part of the Mobility segment of the Smart Belgium strategy implemented by Belfius.

Campaigns designed to encourage children to walk or cycle to school are usually targeted at parents, not at children themselves. But Belfius and the 3 towns and municipalities that  signed up, have opted to take a completely new and different approach: their initial aim is to motivate the schoolchildren in such a way, that they can persuade their parents to leave the car at home.

From local ‘ducats’ to ‘digital currency’

A few months ago, the town of Bonheiden won the Belfius Smart City Award with a campaign in which children were encouraged with physical ‘ducats’ to walk or cycle to school. The campaign was a great success: 500 of the 800 schoolchildren in infant and primary classes registered for the project and the number of pupils cycling or walking to school rose from 12% to 62%. In the space of a year, more than 146,000 kilometers of driving and almost 30 tons of CO2 emissions were avoided. The number of accidents close to schools also fell dramatically. And to jump aboard the digital train totally, Bonheiden also wanted to convert the ‘ducats’ into a ‘digital currency’ based on blockchain technology.

Belfius immediately believed in the project and asked its innovation lab, The Studio, and the Belgian IT company, Flow Pilots, to join forces and develop a digital service which goes live this month in 3 pilot towns: Bonheiden, Peer and Crisnée. Belfius firmly believes that the application can help local authorities to improve mobility in their district, while at the same time making the areas around schools safer and healthier. Many other towns and municipalities have already shown considerable interest in this smart – and user-friendly – solution.

How does it work?

When registered, the children receive a sensor (RFID tag or badge) that they can fit to their bike or hang from their school satchel. At school there is an RFID scanner that automatically detects when a child rides into the bicycle storage area or arrives at school on foot. The children receive points for this, which can be converted immediately into ‘ducats’. An algorithm calculates the number of points earned per journey made by bike or on foot. This involves calculating the distance from home to school, the kind of weather on the day and what season it is. Bonus points can also be earned, for example by wearing a helmet. Local partners can join the system and offer the ability to pay for purchases with virtual ducats. As a result, the project also supports the local economy.

Fully ‘mobile’ and designed for kids

Participating children, schools and merchants will soon be able to access the platform. Pupils can use the app to view their points balance and the distances covered. Their parents can also immediately see how much fuel they have saved thanks to their children’s efforts. A dashboard shows municipalities and schools a summary of the number of participants, the savings of CO2, the number of kilometers not traveled by car and so on. Partner merchants then use the app’s cash register module to convert the virtual ducats to euro in a single click.

Many primary schoolchildren don’t have their own smartphone yet and so cannot use the app. As an alternative, they are given a physical card that enables them to use their ducats at the fair, swimming pool, etc.