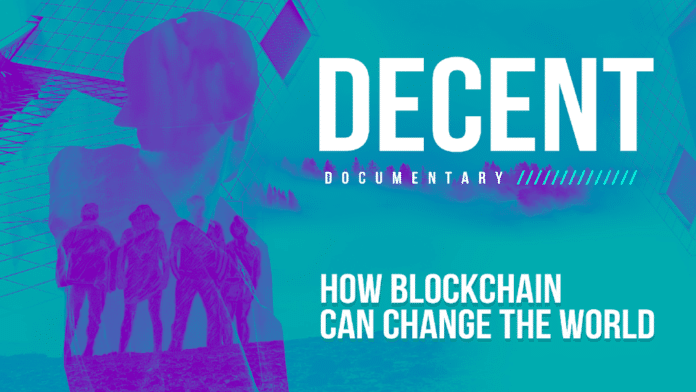 A new documentary about Blockchain, in the making, called ‘Decent’ is expected to premiere in September 2019. The film, produced by Anna Konieczna and directed by Marek Osiecimski, tells the story of three different people with a strong connection to Blockchain technology. The backgrounds of these main characters and this new technology, and how it could possibly change their world for the better, are the focus of the movie. The documentary is being funded through crowdfunding and sponsorships.

According to Anna Konieczna, the idea of creating this documentary came with the proposal to receive some financing by The Golem Project.

“The first funds allowed us to start shooting in Puerto Rico. Seeing a huge potential in this subject, we started to look for sponsorships among companies whose activities are based on blockchain technology. Until now, we have succeeded in gaining funds from Golem, StreamR, RightMesh, and DaoStack. We used a Tokit crowdfunding platform for artists, to collect part of the funds we needed.” stated Konieczna.

According to the filmmakers, the Decent Documentary doesn’t just explain in an approachable way what blockchain technology is, it is also an image of the contemporary world and its biggest problems. Such as polarization between the poorest majority and the richest minority, the refugee problem, and climate change – Blockchain can appear in each of these topics and make a significant difference. With that background, the creators of ‘Decent’ focus on presenting the story of specific people who – consciously or not – interact with this new technology.

The documentary is set in different parts of the world and the makers believe that the diversification of the settings will catch the viewers’ attention from the beginning, to the last seconds.

The choice of the locations is not coincidental. From the early beginning the idea of the ‘Decent’ makers, was to base the movie on the stories of people living in different parts of the world.

The filming, done by Sebastian Strzelecki who’s in charge of cinematography, has already taken place in countries like Puerto Rico, Bangladesh, and Switzerland and is still planned to take place in locations like in Venezuela, Argentina and Brazil. Most of these places have one thing in common – they are going through or have recently been through a lot of turmoil. Together the characters tackle the biggest question in the movie: can Blockchain change the world, their world, for the better?

“Investors from Europe or coders from the United States are as important as a Muslim minority from Myanmar or an ambitious Venezuelan who loses his own country and Brazilian activist who brings technological know-how to favelas.”

To have a better understanding of Blockchain technology the Decent Documentary film crew also interviewed around 60 experts from around the world to deepen and truly understand the subject. Between the various interviewees, some big names appeared such as Brock Pierce, Vitalik Buterin, Santiago Siri and Sheila Warren. Even though not all 60 of them will be included in the movie, these talks enabled filmmakers to see the whole unbiased picture.

The creators of the documentary are well aware that it isn’t possible to fully get to the bottom of a topic as complex as Blockchain, however they think the diversity of the main characters as well as experts, and their different experiences with blockchain technology in different parts of the world, will make the film varied and interesting for any future recipient, while trying to explain the subject in the easiest way possible.

They are hoping that at the same time the film is also engaging and entertaining.

Backing the project could be possible through the Indiegogo campaign