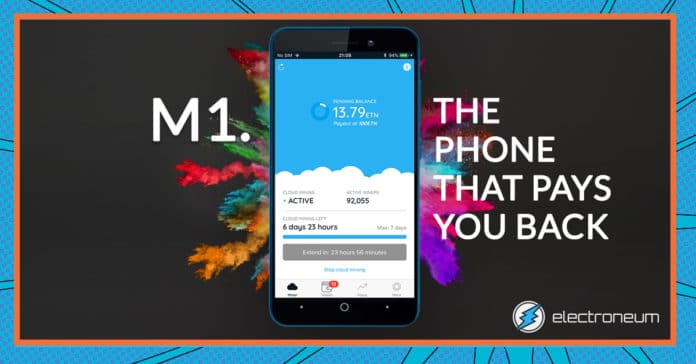 The launch of the M1 by Electroneum this week is about to disrupt the mobile industry in the developing world, as the company’s Blockchain technology empowers users to be paid in return for its use, through a mobile app.

The device has incorporated the tech firm’s groundbreaking Cloud Mining technology which enables users to earn cryptocurrency with their devices. Consumers can now expect a Google GMS certified smartphone at an RRP of around $80 USD – which would traditionally be the price point of a reconditioned handset.

Styled in ‘Electroneum Blue’, the M1 draws upon leading smartphone designs and proves to be a dependable competitor in terms of quality and performance. The device’s extensive functionality, including 4G and dual-sim capabilities, could mean that millions across the developing world can own a brand new smartphone without the expensive price tag.

The Smartphone that Pays You Back

Cryptocurrencies such as Bitcoin are earned by “mining” them with expensive server equipment. Electroneum is the first cryptocurrency that can be “mined” by just using the Electroneum app-based Cloud Mining system which is ENT accesable on the personal smartphone. This allows anyone to earn some ETN cryptocurrency directly from their devices. Only simple interactions are required to commence mining on the free app, and once completed, mining can continue offline.

By integrating the technology into the M1, the smartphone promotes Cloud Mining and rewards users with Electroneum (ETN). The cryptocurrency can be used to pay for services such as mobile top ups (airtime and data), online services or shopping.

While smartphones increasingly form the backbone of our global economy, the M1 was designed to meet the needs of those in developing countries. With a good economic price point, Electroneum has tackled one of the most substantial impediments facing global cryptocurrency adoption; its lack of accessibility.

Electroneum CEO and founder, Richard Ells, has said the development of the M1 is the result of combining a perfect team of industry experts to make it happen.

“With our experience in tech, we were able to gather a world-class team consisting of telecommunications, manufacturing, emerging area mobile-operators, product design and marketing specialists, all helping to make this utopian vision of ours a reality.

Without the broad range of talent and expertise, we could never have imagined the possibility of making a product of this calibre accessible for anyone in the world, and we are extremely proud of the result”

The low-profit margin set by Electroneum relates to their core vision of their drive of global Blockchain and cryptocurrency proliferation. The M1 represents not only a powerful tool for communication but also a means of financial empowerment for the millions in economically disadvantaged areas.

Meanwhile international retailers have already shown a keen interest in stocking the device. For many consumers in the developing world, the M1 represents the opportunity to buy a brand new smartphone for the first time in their lives.

Consumers have added confidence in an extensive warranty program and the knowledge that the M1 has passed stringent GSMA approval and Google GMS certified qualifications. The latter of which were key for Electroneum to enable compatibility with all network operators around the world.