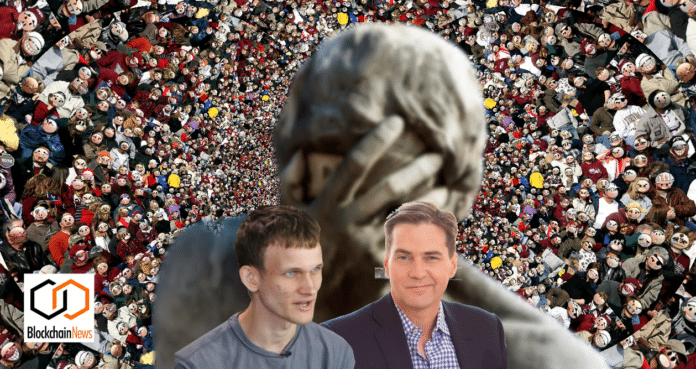 Craig Wright, who says he is the founder of Bitcoin Satoshi Nakamoto and has been the subject of intense scrutiny from the press and been heavily ripped apart by the Reddit community in the past, is threating lawsuits against Ethereum founder Vitalik Buterin (who keeps a library called the Cult of Craig on Github) and podcaster Peter McCormack who poked at Wright for claiming to be Satoshi on Twitter too many times apparently.  Wright sent letters last week of his intent to litigate both of them – according to a recent Bloomberg news article.

Buterin has claimed publicly he does not believe Wright is Nakamoto

McCormack retorted that he has taken legal advice… snapping that Wright's claim was so vexatious that he now has 15 lawyers who are willing to represent him on a pro bono basis:

My formal response to the letter issued by the lawyers of Craig Wright and @CalvinAyre. This was sent today. We look forward to resolving this quickly and efficiently. pic.twitter.com/ANSmF1kH8k

Wright, who has claimed to have filed 666 patents on Blockchain, is being sued for a billion dollars, is likely not Nakamoto according to Bitcoin pioneer, Jeff Garzik said in Bloomberg last year:

“My personal theory is that it’s Floridian Dave Kleiman,” Garzik said in a phone interview. “It matches his coding style, this gentleman was self-taught. And the Bitcoin coder was someone who was very, very smart, but not a classically trained software engineer.”

Wired was also dubious. And there's a slew of evidence brought forward by internet sleuths that Wright allegedly twisted the evidence trying to prove he was Bitcoin's founder by faking Satoshi's PGP keys, an allegedly faked cryptographic representation of a 2009 transaction that took place on the Blockchain and more. Venzen Khaosan from CCN did an extensive expose on the technical proof alleging Wright was not Satoshi in 2016.

And just two days ago Reddit detectives alleged an email submitted by Wright in the Kleiman court case is faked. Not to mention all the Bitcoin, in any case, was allegedly shown to have nothing to do with Wright or Kleiman.

However, Wright's claim he is Nakamoto was originally backed as truth by two significant members of the Bitcoin community: founding director at Bitcoin Foundation and CEO of Hushmail Jon Matonis (who has now stopped working with Wright) and chief scientist at the Bitcoin Foundation Gavin Andresen (who then retracted his statement).

But the Streisand Effect has begun. When you try to clamp down on detractors, things tend to get worse.

Not to forget bitcoin.com

In the next thirty days, we will end even close out support for #BSV transactions. To use #BSV, go somewhere else! https://t.co/PCsbtn3MHG https://t.co/oSN19wIWre

And then Eric Voorhees from Shapeshift.

We stand with @binance and CZ's sentiments. We’ve decided to delist Bitcoin SV #BSV from @ShapeShift_io within 48 hrs.

To preserve our integrity & community trust, we will delist $BCHSV before it causes trouble and destroys more confidence in the crypto space! $BCHSV will be delisted within 24hrs. Withdrawals will be kept open @BitrueOfficial . @cz_binance @ErikVoorhees @Curis_Wang https://t.co/BqxhMZBN3w

Bittylicious is delisting Bitcoin SV (BSV). This will be available until 22nd April (pending brokers keeping their listings alive).

Low volumes aside, we are doing this to show solidarity against the toxic litigious environment in the BSV space @PeterMcCormack @cz_binance

Free speech is something that even the crypto-anarchist Libertarians and altruistic, lefty, ideologues in the community can seemingly agree on. This is a classic Streisand Effect in action.

But if you think things could not get any weirder, controversial Canadian billionaire and Antigua-based online gambling czar and Wright supporter, Calvin Ayre blasted out a series of tweets in Wright’s defence, Bizarrely comparing him to Jesus Christ.

Imagine how the Catholic Church would react to Jesus showing up today. that is how the high priests of the crypto world are reacting to Craig wanting to now prove in court that he is Satoshi. They are horrified about what he thinks of their stupid plans. 🙂#CraigisSatoshi

Oh yes, it can get weirder, former Libertarian presidential candidate John McAfee says he is suing Ayre and vows to bankrupt the billionaire.

CoinRivet sued by Calvin Ayre. I'm suing Calvin for $800 mil. Calvin stated that I committed murder. Completely unsubstantiable. Cuba is a Civil Law country – making lawsuits diffucult. However, I traced his assets to other countries. I will bankrupt him. https://t.co/BubOuoZLxI

I am not saying McAfee is a murderer, I am saying the guy who confessed to killing his neighbour in Belize is saying John paid him so is a murderer:https://t.co/WbtwSwiwiY

Some in the community are feeling left out of the latest melee in this stranger-than-fiction reality show we called Crypto.

Looks like Wright will be hiring some more lawyers. And no, I am not looking to be sued. Allegedly.