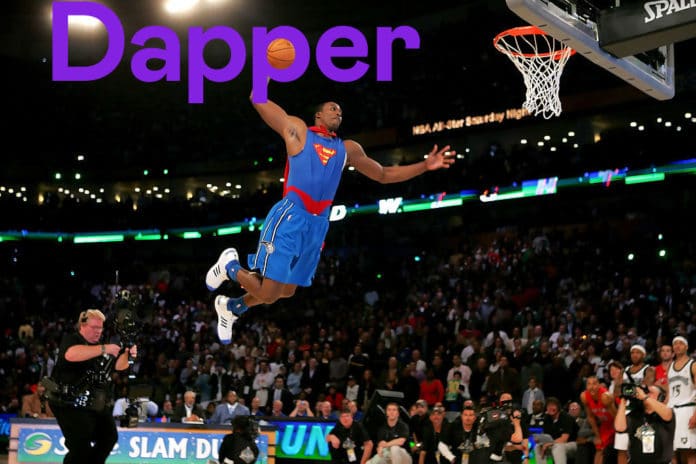 “The NBA and its players are among the greatest heavyweights in global culture,” said Roham Gharegozlou, CEO of Dapper Labs.

“Dapper Labs is proud to work with the NBA and NBPA to create an unparalleled digital experience for sports fans. Through NBA Top Shot basketball fans can engage with their favorite players, teams, and each other in entirely new ways. We use the latest in blockchain technology to create assets and experiences that are guaranteed limited edition and authentic, not to mention portable and permanent in a way nothing digital has ever been before.”

NBA Top Shot will feature a social experience built around digital collectibles as well as a complementary head-to-head game designed to create a fun, authentic and accessible fan engagement on the blockchain. Like other sports games or fantasy brackets, fans who play the game are tasked with creating their ideal squad, but in this game, their rosters are built by acquiring live in-game moments from the NBA season. These moments, such as a Kevin Durant 3-point shot, or Joel Embiid dunk, which are acquired as digital collectibles or tokens, can then be either owned forever or used to compete against other players in online tournaments and leagues on-chain. By introducing innovative features and mechanics to the team-building experience, and simplifying the head-to-head gameplay, NBA Top Shot will offer a fun and compelling experience that is accessible to basketball fans of all ages.

“Dapper Labs’ innovation and expertise make them a perfect partner to introduce this groundbreaking game and what we believe will become coveted digital collectibles for basketball fans around the world,” said Adrienne O’Keeffe, NBA Senior Director, Consumer Products & Gaming Partnerships.

“NBA Top Shot is an entirely new way for fans to connect with their favorite athletes,” added Josh Goodstadt, Executive VP of Licensing for THINK450, the commercial arm of the NBPA. “We believe blockchain technology creates a truly unique product that fans can collect, manage and engage within a fun environment, and we are excited to partner with Dapper Labs to introduce these groundbreaking digital assets to the NBA community.”

The NBA Top Shot collectibles experience is set to launch in the fall, with the game to follow in early 2020. For more information on Dapper Labs, its partnership with NBA and NBPA and the launch of NBA Top Shot, please visit nbatopshot.com.

Dapper Labs is the company behind CryptoKitties, the world’s most successful and popular blockchain application outside of exchanges. Each CryptoKitty is a collectible digital art form represented as non-fungible tokens (NFT) created, managed, and traded through blockchain programs known as smart contracts. Formed in February 2018, Dapper Labs is building a fun, fair, and free world through blockchain gaming. With over $28.75M in the financing, notable investors in Dapper Labs include Andreessen Horowitz, Union Square Ventures, Venrock, GV (formally known as Google Ventures), and the founders of Dreamworks, Reddit, Coinbase, Zynga, and AngelList, among others.

The National Basketball Association is a global sports and media business built around four professional sports leagues: the National Basketball Association, the Women’s National Basketball Association, the NBA G League and the NBA 2K League.  The NBA has established a major international presence with games and programming in 215 countries and territories in 50 languages, and merchandise for sale in more than 100,000 stores in 100 countries on six continents.  NBA rosters at the start of the 2018-19 season featured 108 international players from 42 countries and territories.  NBA Digital’s assets include NBA TV, NBA.com, the NBA App and NBA League Pass.  The NBA has created one of the largest social media communities in the world, with 1.6 billion likes and followers globally across all league, team, and player platforms.  Through NBA Cares, the league addresses important social issues by working with internationally recognized youth-serving organizations that support education, youth and family development, and health-related causes.

The NBPA advocates on behalf of the best interests of all NBA players, including the negotiation of collective bargaining agreements, the filing of grievances on behalf of the players, or counseling players on benefits, educational and post-NBA career opportunities. Business opportunities are generated by THINK450, the subsidiary of the NBPA charged with managing the players’ group licensing rights.

Dedicated to preserving the legacy of its members, the NBPA Foundation provides support and assistance to persons, communities, and organizations around the world that seek to improve the lives of those in need.