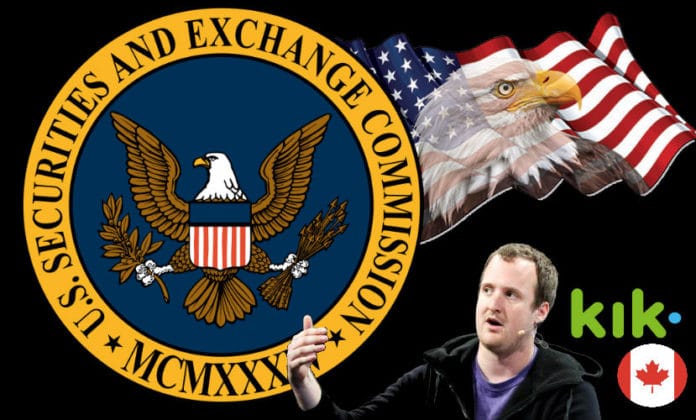 Kik Interactive CEO Ted Livingston has announced in a blog post that Kik will be shutting down its core messaging service and focussing resources on an ongoing battle with the SEC and further developing it’s Kin token as a utility.

“Instead of selling some of our Kin into the limited liquidity that exists today, we made the decision to focus our current resources on the few things that matter most. So today we are announcing three things: We will shut down the Kik app. We will reduce our headcount to an elite 19 person team. We will focus on one thing: converting Kin users into Kin buyers.”

“These are hard decisions. Kik is one of the largest apps in the US. It has industry-leading engagement and is growing again. Over 100 employees and their families will be impacted. People who have poured their hearts and souls into Kik and Kin for over a decade.”

“Together these changes will drop our burn rate by eighty-five percent, putting us in position to get through the SEC trial with the resources we have.”

“But no matter what happens to Kik, Kin is here to stay. Kin operates on an open, decentralized infrastructure run by a dozen independent companies. Kin is a currency used by millions of people in dozens of independent apps. So while the SEC might be able to push us around, taking on the broader Kin Ecosystem will be a much bigger fight. And the Ecosystem is close to adding a lot more firepower.”

“In choosing KIK as a test case for ICO legal precedence, the SEC has a long journey before them.”

“Whether the sale of the KIN tokens was a public sale of securities, conducted illegally, can be hotly debated. More importantly, a decision, either way, would provide some needed regulatory guidance with respect to the laws applicable to sales of digital assets. Accordingly, many, including Ted Livingston, the CEO of KIK, would very much like to see this case move forward.”

As if the stakes were not high enough, the SEC has another problem; even if they win, they lose. One of the main reasons the SEC exists is to protect the “Main Street” investor. Unfortunately, as astutely pointed out in KIK’s response to the Wells Notice, enforcement against KIK will hurt the very people the SEC is supposed to protect. The KIN ICO raised nearly $100 million from a large number of people. Given the $4,400 per person cap on purchases, over 20,000 people purchased KIN. In the two years that followed many of those original purchasers sold the KIN they purchased to secondary purchasers.”

At this point, the KIN token is very widely distributed. If the SEC were to succeed in an enforcement action against KIK, the main result would be that KIK would be subject to large scale monetary penalties. Even bringing the enforcement action will result in an expensive battle for KIK. That liability results in a major detriment to KIK’s ability to further their project, ironically the very thing that the current holders of KIN need to succeed in order to see the value of their KIN tokens increase. In short, if the SEC wins, the “Main Street” investors holding KIN lose.”

“The SEC already has a perception problem. No one denies that protecting the “Main Street” investor and overseeing orderly markets is a very worthwhile goal. The problem is that in pursuing that goal, the SEC has created a perception that they are against innovation. They may protest otherwise (and they may be right), but as issuers of digital assets eschew the United States for more lenient (or at least more definite) regulatory environments, one cannot deny that the SEC appears at best reticent to allow the new technology to flourish. One can imagine the outcry from the public that would result if the SEC pursued KIK for a win with a draconian penalty.”

So now what? Nothing actually compels the SEC to pursue KIK any further. The purpose of the Wells Notice, is, in fact, to allow a would-be-target of SEC enforcement an opportunity to convince the SEC not to take action. If the SEC brings the case, they have no truly positive outcomes. If the SEC announces they will not bring the case, they embolden issuers of digital assets to encroach on turf the SEC has thus far vigorously defended. Of course, the SEC can stick with its established modus operandi, provide no guidance at all. Say nothing at all; just back away, slowly. Unfortunate, but probable.”

“…Much like the actions of the RIAA, the SEC’s unfortunate activities in respect of KIK illustrate what should be an obvious conclusion (though maybe an inconvenient truth). Digital Assets are a new class of assets. Sometimes, they will be similar to securities, commodities and/or currency, and could be regulated as such. There are, however, different models, which require new thinking in terms of regulation. As much as the SEC protests otherwise, the world has a new asset class (maybe more than one), and new rules are required.”

Defend Crypto, a new website has been set up for supporters to contribute to the fundraising effort not just for Kik but also for other companies into the future.