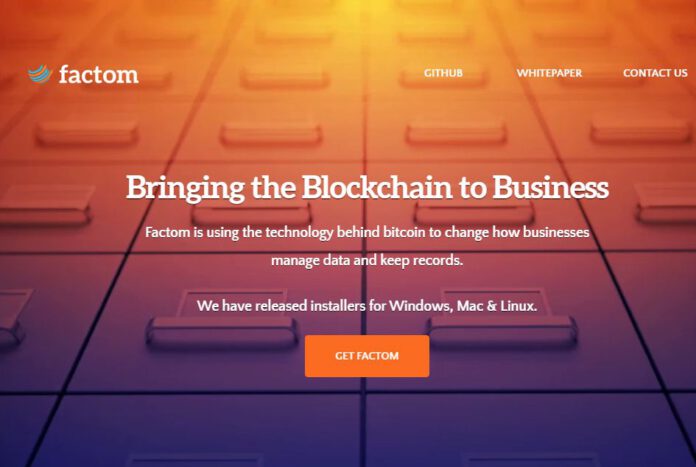 Kuala Innovations has subscribed for 3.64 per centof the issued shares of Factom a data company working with multi-national companies to integrate blockchain technology for data storage, management and security across industries. Kuala Innovations has acquired 400,000 Seed Series Shares of Factom at a price of US$1.00 per Factom Share for a total cash consideration of US$400,000 At the price paid by the Company, Factom has an aggregate pre-money value of approximately US$11 million. Commenting on the Factom Subscription, Kuala Co-Chairman Mr Jim Mellon noted:

“Factom has the potential to revolutionise the way industries handle, process and store “big data”, applying the huge advances of blockchain technology to real commercial issues and improving existing practices in terms of cost, time and effectiveness. With growing sales, a wide developer network integrating additional applications, and a pipeline of large client wins expected over the next 12 months, the Board believes this seed round investment by Kuala comes ahead of a significant value shift for Factom when it completes its anticipated Series A funding in the first half of 2016.”

Factom’s software allows companies to maintain a permanent, time-stamped record of their data tied to blockchains, reducing the cost and complexity of conducting audits, managing records, and complying with government regulations. In the financial services industry, Factom tools let customers build transparent accountability systems for the financial industry, helping clients build immutable records that can be synced and shared among multiple parties. The validation and verification tools let the client audit these transactions in real time or run more sophisticated business process analysis of systems in the future.

These same transparent audit tools can be used to build more transparent and accountable claims processing systems for the insurance industry and create more valuable models of risk analysis and customer profiling. Factom is working on proof of concept projects with some key insurance providers and learning how to integrate with existing claims systems. Significant potential also exists for Factom technology to enhance the security of data and records within the healthcare and pharmaceutical industries, the telecoms industry, mobile banking, and for online real estate transactions. Factom has sold US$1.2 million of its “Factoid” software licenses.

Factom has over 1,500 software purchasers and has established an active developer network building interesting tools to integrate with Factom technology. Factom is currently negotiating terms of engagement with a number of large US companies including those in the banking, insurance and healthcare industries. With a heavy focus initially on development of their platform technology, the company nevertheless has demonstrated early revenues.

For the 9 months ended 30 September 2015 Factom had gross sales of US$628,337 (resulting in a trading loss of US$358,142 for the period). As at 30 September 2015 Factom had total net assets of US$55,727. Factom continues to focus on revenue growth alongside ongoing development of the Factom technology. Further details regarding Factom are available at its website http://factom.org