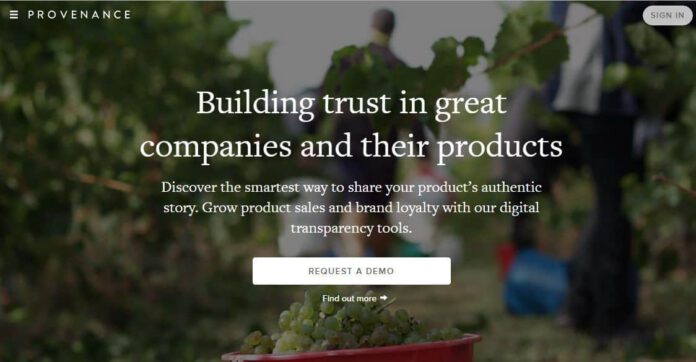 Provenance has just released a white paper called: How blockchain can bring trust and transparency to global supply chains.

Blockchains are going to transform the notion of trust on the web according to Provenance, who are pioneers for transparency in product supply chains. The paper was written by founder, Jessi Baker, along with Provenance Information Architect Dr Jutta Steiner and in collaboration with the team that created Ethereum.

The Guardian says Provenance is: “Starting a revolution in consumer understanding”, and The Next Web adds that the company is: “Designed to let users know more about where their products are coming from”.

In the face of these efforts, we must ask ourselves: can one organization be trusted to broker all data about every product’s supply chain? The truth is that no single organization can, and that relying on one party (or even a small collection of cooperating parties) creates an inherent bias and weakness in the system. If the party were the brand itself, or the most powerful actor in the supply chain, then it would be responsible ultimately for only its own bottom line; this could lead to selective disclosure or, worse, extortion. If the supply chain data were gathered by a third party, it would have to be both totally unbiased and properly incentivized to deliver the technical capability of running the system. Third parties like NGOs or industry associations, however, rarely manage even one of these two, and even if they could, they would become a single point of weakness; this would make them and their operations a vulnerable target for bribery, social engineering, or targeted hacking. Distributing the transaction platform among various third parties would add further difficulties, as the shared costs for its set up and operation would be difficult to apportion and agree on, as benefits to each party are not usually made transparent.

Despite these difficulties, the idea of using a centralized system with a governing third party was, until recently, the only conceivable way to achieve data and transaction transparency along supply chains. Today, however, a new technology called the blockchain presents a whole new approach. The blockchain is a recent development in the field of computer science, which uses a global peer-to-peer network to provide an open platform that can deliver neutrality, reliability and security. The basic mechanism was originally proposed as part of a solution for administering the shared accounting ledger underlying Bitcoin [“Bitcoin: A Peer-to-Peer Electronic Cash System”, Satoshi Nakamoto, 2008]. Beyond this initial financial application, blockchains can be generalized and used to implement an arbitrary set of rules that no one, neither the users nor the operators of the system, can break. They rely on a completely different system architecture — one that we will detail below — that makes them a unique platform for applications involving multiple parties with little trust in each other; for example, fragmented supply chains. We stress that our approach does not require any particular behavior on behalf of the participants; instead, the underlying technology guarantees the integrity of the system even in the face of dishonesty or idleness. In this way, we provide a technological solution to an organizational problem.

Provenance is one of the first companies to build a system of this kind and pioneer blockchain technology for social and environmental good. Next up sees our end-to-end pilot in the fishing industry – watch this space as we track fish from Indonesia, Scotland and Japan.