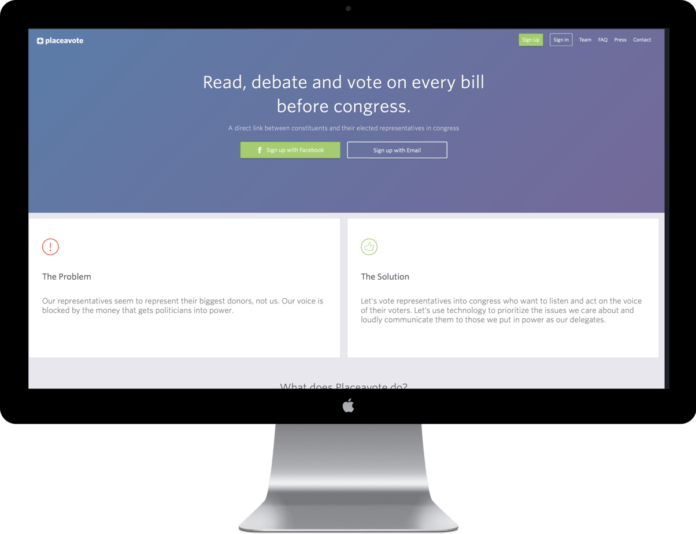 Political engagement startup PlaceAVote.com, has announced the launch of its secure, nonpartisan web and mobile platforms which gives users a place to read, debate, and securely vote on political issues.

Through secure technology built on Ethereum, PlaceAVote protects and verifies the identity and accuracy of each user and their information. The software is intended to create a real-time mechanism for the national population to interact with their politicians with the aim to encourage others to be better informed, have a stance and to make their voice heard.

By using PlaceAVote's technology, voters will be encouraged to share their inner voices while overcoming national concerns to uncover the hidden workings of what drives political movements. This new social platform will create a more engaged network of politically engaged users.

Voters are increasingly facing a crisis of confidence when it comes to the political system. Today, only 19% of Americans say they trust the government always or most of the time, and when it comes to politicians, 55% of the public says that “ordinary Americans” would do a better job in solving national problems than elected officials [1]. Consequently, average U.S. voter turnout trails most other developed countries [2]. PlaceAVote's goal is to make the democratic process more accessible by providing district voters an easy way to connect with their representatives and share their thoughts throughout the legislative process. Simultaneously, this gives elected officials the ability to vote along with their constituencies. Now, there's a direct line to politicians, boosting American civic engagement and eliminating the “my vote doesn't count” concern.

This transparent service gives PlaceAVote users a greater voice in national politics, allowing visibility into the latest bills, as well as the ability to instantly send feedback and messages to the representatives passing these bills. Congressmen, via PlaceAVote, now have a granular snapshot into their district's views on all issues. In turn, these active voters can gain their own following, become subject matter experts and engage with public officials while publishing personal votes.

“Our platform is intended to help citizens improve the weight of their votes, and hopefully encourage them to be involved and turn out for Election Day,” states Luke Davis, Co-Founder of PlaceAVote. He adds, “PlaceAVote is the much-needed first step towards a better government that truly works for its people. Let's use technology to prioritize the issues we care about and loudly communicate them to those we put in power as our delegates.”

PlaceAVote is a secure, nonpartisan forum that lets users read, debate, and vote on every bill before congress. Users are securely verified with results published onto a Blockchain-style voting platform, allowing real-time data-feeds and analytics for politicians, organizations and media looking to engage politically active users. PlaceAVote was founded in Los Angeles, California by Ben Colman and Luke Davis. For more information, please visit PlaceAVote.com.

The Necessity of Delegated Proof of Stake