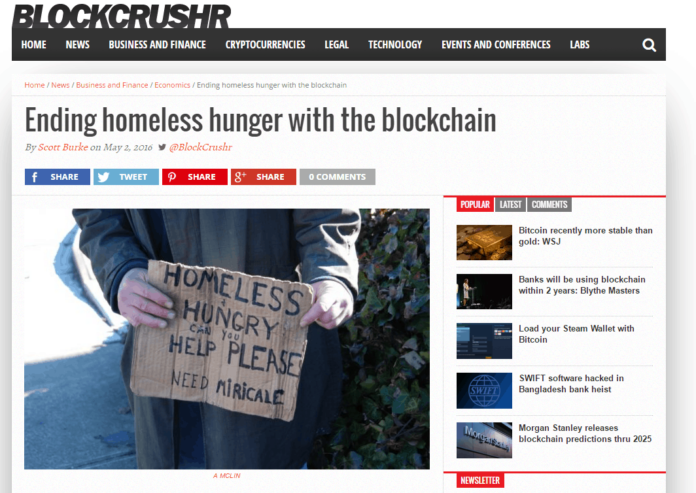 BlockCrushr Labs say they have a rock solid solution to revolutionize P2P (person to person) street giving, using “Blockchain” technology to ensure that funds given to buy meals and other necessities are spent for their intended purpose. The system addresses diversion of funds and the declining prevalence of people carrying cash, by allowing people to anonymously load “digital food wallets” of homeless or marginalized people in their neighborhoods through common payment methods such as smartphones, credit cards and Paypal. The “smart wallets” can be spent securely at participating food retailers.

“Nobody should feel the desperation of true hunger in a society which has so much abundance,” said Scott Burke, founder of BlockCrushr Labs and author of the white paper released today describing the system. “Blockchain platforms such as Ethereum have provided us with exciting tools to solve this problem with a community-based, free-market solution that taps into the global payments system. Secure, 1-way donations which can only be spent on food or other necessities could give vulnerable and homeless persons more predictability and dignity – Improving the quality of their lives while giving them the food stability they need in order to move their own lives forward.”

According to one study of panhandling in San Francisco, although 94% of panhandlers use the money they collect to buy food, 44% also use it to buy drugs and alcohol[i]. This dynamic is a main inhibitor of P2P street giving, due to many people’s reluctance to feel like they are contributing to someone’s addiction – one that may be keeping them on the street, or have put them there in the first place.

The other primary barrier to giving is that people just aren’t carrying cash anymore. 90% of US citizens never, rarely or only sometimes carry cash[ii]. BlockCrushr’s proposed solution implements the payment methods people use daily, leveraging access to the global banking system while providing a secure, anonymous, 1-way firewall for givers.

The white paper, entitled “Ending Homeless Hunger With The Blockchain”, describes a system where homeless or vulnerable people hand out small business cards or pieces of paper with a web site and a scannable QR code on them to people who may wish to give them money for food. The giver takes the card, downloads an app and scans the code to access a secure checkout page to donate. Recipients of funds can check their balance at a participating retailer or anywhere with internet access such as a public internet terminal at a local library.

Recipients are also issued a “private key” to spend funds, which is a card or piece of paper with another QR code on it. Participating food retailers scan their private key in order to check the balance and complete the transaction. The smart wallets allow the possibility of daily spending limits or other restrictions to maintain the effectiveness and integrity of the system.

BlockCrushr Labs describes the proposal as a first draft and they are asking for feedback from any and all interested parties.

The white paper, “Ending homeless hunger with the Blockchain”, can be downloaded from BlockCrushr Labs’ web site here.

BlockCrushr Labs is a Blockchain research and commercialization laboratory based in Halifax, Nova Scotia, Canada. BlockCrushr was founded in April 2016 by Scott Burke, a full stack developer and designer, and the former CEO of several successful internet companies with over 20 years of deep technology experience.