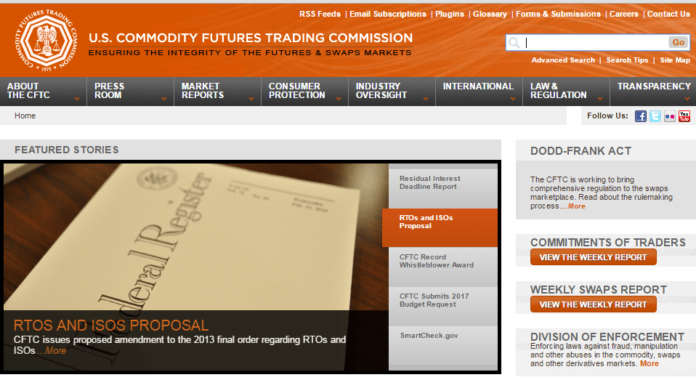 In a recent speech to financial information and services company industry body Markit in New York, US Commodity and Futures Trading Commission Commissioner Christopher Giancarlo discussed the potential of distributed ledger technology (DLT) , which he called

“…the biggest technological innovation in the financial services industry and financial market regulation in a generation or more.”

He noted the potential for distributed ledger technology to reduce dependence on third parties, mitigate centralized systemic risk, and perform margin payments in the event of a counterparty default.

I have been speaking a lot about DLT recently because I believe in its promising benefits. I also believe that, in order for this technology to flourish, regulators must take a “do no harm” approach. I first addressed the technology in a lecture I gave at Harvard Law School last December. This past February the CFTC held a widely attended industry roundtable on blockchain. In March I spoke about DLT at the Depository Trust & Clearing Corp.’s (DTCC) Blockchain Symposium and addressed it later in Washington at the Cato Institute and last week, a few blocks from here, at Consensus 2016.

Today, I want to expand on my “do no harm” approach by outlining five practical steps that regulators must take to encourage DLT innovation. But before I get to those steps I want to briefly tell you why I think DLT is so important and why we regulators need to get it right.

DLT is likely to have a broad impact on global financial markets in payments, banking, securities settlement, title recording, cyber security and trade reporting and analysis.7 DLT will likely develop hand-in-hand with new “smart” securities and derivatives that can value themselves in real-time, report themselves to data repositories, automatically calculate and perform margin payments and even terminate themselves in the event of counterparty default.

DLT may enable market participants to manage the enormous operational, transactional and capital complexities brought about by the legion of disparate mandates, regulations and capital requirements promulgated unceasingly by regulators here and abroad. In fact, one study estimates that DLT could eventually allow financial institutions to save as much as $20 billion in infrastructure and operational costs each year. Another study reportedly estimates that blockchain could cut trading settlement costs by a third, or $16 billion a year, and cut capital requirements by $120 billion.

In addition to the operational and transactional advantages that distributed ledger technology could bring to firms, Giancarlo suggested that it could also help financial market regulators in overseeing the broader financial market.

He noted that regulations regarding distributed ledger technology are likely years away but suggested five steps for regulators to take to ensure that they “do no harm” to allow for distributed ledger technology innovation. Specifically, he recommended that the CFTC and other regulators designate teams to work collaboratively with FinTech companies, foster a regulatory environment that spurs innovation, participate directly in proof of concepts to ensure they understand the technology, work with innovators to determine how rules and regulations should be adopted, and collaborate globally.