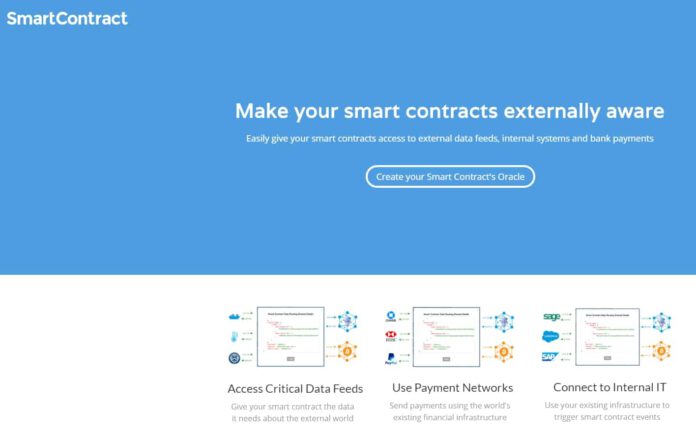 Smart Oracles from SmartContract.com greatly simplifies creating this critical connectivity between leading smart contract networks (Bitcoin and Ethereum) and the existing infrastructure which smart contracts will need to receive commands from, making ongoing updates to, and rely on, to send traditional bank payments.

The Smart Oracles platform recently released by SmartContract.com currently supports the Ethereum and Bitcoin Blockchains, with Ethereum smart contracts for Insurance and Derivatives already successfully releasing Bitcoin based on their assessment of external data feeds.

As part of their commitment to supporting smart contract developers they have also released a series of Free Public Oracles that provide common data feeds to any Ethereum smart contract. The public oracles greatly reduce the development time of smart contracts that utilize their specific data feeds and provide an initial demonstration of the types of smart oracle which can be created in less than 15 minutes on SmartContract.com.

More Free Public Oracles are planned and they are excited to hear requests or suggestions as they continue to collaborate closely with multiple high quality data providers.

Below are three of the first initial Free Public Oracles, available for immediate use.

“Easily connecting smart contracts to the data sources, internal services and bank payment methods desired by users is the next step in making them truly useful for real world use cases,” stated Sergey Nazarov CEO, SmartContract.com

SmartContract.com has been a leader in Blockchain-based application development since 2014 and was selected by the World Economic Forum as “The Shift in Action” for Blockchain technology in late 2015 (please see attached). Based in San Francisco and funded by top-tier venture capital firm Data Collective, SmartContract.com's team is committed to accelerating the use of smart contracts as a key building block for the trustless commerce revolution currently underway.

We believe that smart contracts which can interact with the external world are an essential building block for the trustless commerce revolution which is on track to provide the security, trust and transparency needed for our global financial system to function as it was meant to.

Stellar: The Right Platform for LendLedger