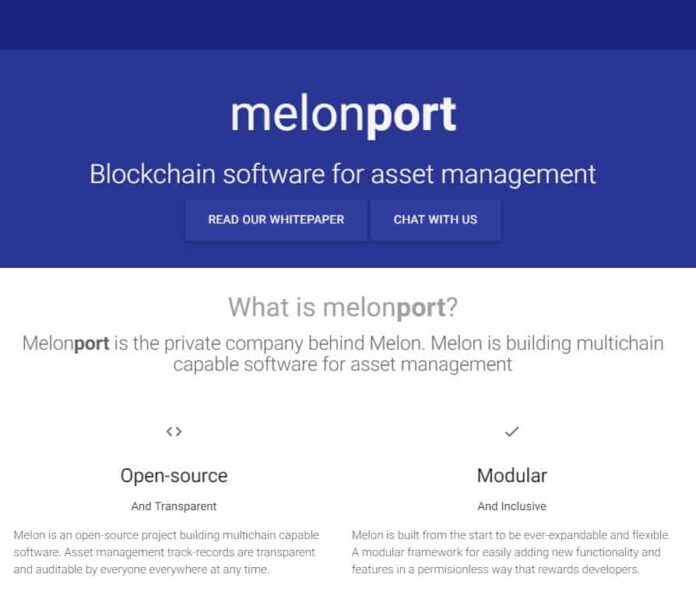 Dr. Gavin Wood – the original founder of Ethereum and Ethcore/Parity – is slated to work with Melonport on a new ‘hedge fund' manager for cryptofinancing portfolios that will run on Wood's new Polkadot platform. Polkadot will bring multiple kinds of Blockchains into one large network, with pooled security and designed to allow Blockchains which follow certain specifications to integrate easily, creating a single inclusive interoperable multi-chain network.

Melon will provide the first use case – a completely decentralised Blockchain infrastructure intended to give secure and user-friendly access to manage or invest in portfolios, similar to hedge funds. It goes beyond a normal crypto wallet providing a “rule set” which forces certain elements to portfolios (eg. performance calculations and trade restrictions) to be a non-negotiable part whilst allowing user choices on more opinionated matters (eg. price feed sources, exchanges, management fee, etc).

Melonport plans to launch a Melon token pre-sale accepting Ether contributions that will go towards the building of Polkadot and Melon. More information can be expected on this towards the end of the month.

Melon is completely open-source software which is envisaged to enable competitive and decentralised asset management solutions. It will initially be targeted at individuals looking to set up and manage crypto portfolios and build their track records on it. The protocol allows for investing and redeeming in portfolios and will become a way for people to discover and gain exposure to these crypto portfolios cheaply and transparently. As digital assets become more mainstream, we expect this protocol to be adopted by more traditional asset managers.

“We're very excited to be embarking on this path with Melonport. As a next-generation technology which is able to bring together open chains and enterprise chains, we feel Polkadot is uniquely suited to Melon's use-case and welcome the challenge of developing this technology to fruition with open arms.”

“Traditional methods of wealth preservation have offered a good service for a long time but we have also seen their limitations. My experience together with Reto’s technical skills have been very complimentary. We believe that a collaboration with Parity, will be very complimentary as well and will help make this idea even bigger.”

Reto Trinkler, a mathematician from one of the world’s leading university, ETH Zurich, developed a profit making algorithm for sports betting exchanges in C++ whilst still at university.

“We thought about this a lot and we really want the Melon project to be an open, collaborative effort. Whilst we plan to develop a set of modules ourselves, we have structured our usage tokens in a way that will reward developers. In this way, we believe we can future proof development and collectively come up with the first ever blockchain protocol and software for asset management.”