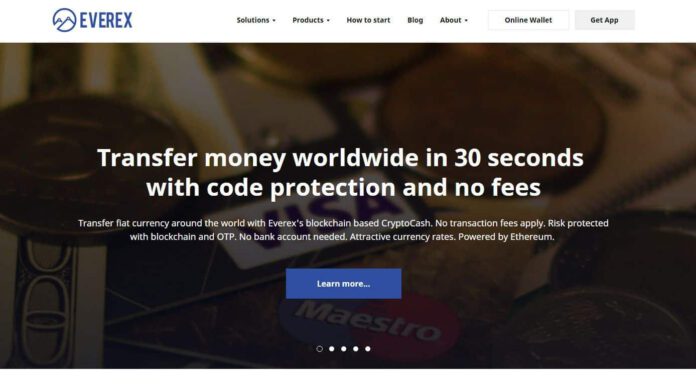 Over 100 migrant workers transferred money instantly over Blockchain to their homes in Myanmar in the last months. It marks a successful pilot test for Everex, a company aiming to give financial access to the world’s huge “Bottom of the Pyramid” (BOP) population. Overall, average transaction took less than a minute and recorded savings of over 7% in remittance cost and currency exchange rates. Everex essentially hands the power to send any amount of money fast and cheap around the world to individual users, wherever they live.

The test is just a small start, but has major significance.

Over 850,000 Thai baht (around $24,000 USD) were transferred using the Everex wallet, a mobile and web based app that sends digitized national currencies using Ethereum Blockchain.

With over 500 signed users, mainly in Thailand, the Everex wallet is capable of transferring any custom digital asset over the Ethereum Blockchain.

Sending and currency conversion both happened in less than a minute and incurred no transaction fees.

Although the test recipients used Myanmar money-changers to switch from CryptoCash back to physical cash, no centralized entity performed the actual remittance. This cuts time and costs dramatically, since the transmission process was automated with programmable smart contracts on Ethereum

This means powerful financial tools, which have always been the proprietary domain of large financial institutions, are now available to ordinary people everywhere.

Not Reinventing the Wheel, Just Making Them Smoother

Everex understands the value of national currencies and existing financial networks. Unlike some Blockchain projects, it’s not trying to replace them completely — the aim is to make them better.

In this world, there’s still an important role for banks and other financial players to store the “real money” that backs up “CryptoCash” and to keep its value stable.

Estimates say there are between two and five million Myanmar citizens now living in Thailand.

In fact, it’s possible as much as 10% of the country’s 51 million population lives overseas — though the exact number is uncertain. The largest number lives in Thailand, with the rest spread throughout the rest of Asia.

This Economist article of two years ago highlights how mistrust in existing remittance and financial networks meant Myanmar workers sent most of their money home via informal channels.

A trust-based cash system called hundi — similar to the hawala remittance networks of the Islamic world — served their needs. These systems have little transparency and often hide a mountain of extra charges in unfavorable FX rates and conversions, even if rates appear low on the surface.

But the story highlights how, if people cannot use or trust existing financial systems, they’ll find a way to route around them. That’s where Everex comes in — transparent and requiring far fewer human intermediaries.

Everex offers the best of all these worlds. Transfers and conversions are based on the global Ethereum smart contracts network — utilizing the latest in Blockchain technology.

To find out more about Everex and the other powerful Ethereum tools we’re developing, check company site here.