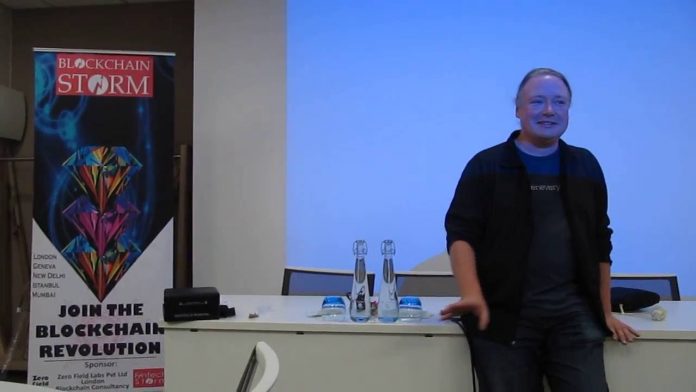 Today is the first day of the invite-only Lake Tahoe based Linux Foundation’s Open Source Leadership Summit, where Executive Director, Brian Behlendorf is to give an update to the community on Hyperledger, the largest open source private Blockchain currently being managed by the Linux team.

Behlendorf blogged on the one-year milestone:

Last February, The Linux Foundation announced 30 founding members and six of those proposed contributions of code to advance blockchain technology under Hyperledger. Fast forward to today, Hyperledger is now the fastest growing project ever hosted by The Linux Foundation. More than 110 member companies that span numerous industries make up the project and support five incubated open source projects. Hyperledger membership is truly global with 39% in APAC (25% in China), 20% in EMEA and 41% spread across North America. Below is an overview highlighting the important achievements in Hyperledger’s first year.

In May 2016, the co-founder of the Apache Software Foundation, Brian Behlendorf joined Hyperledger. Like any great collaborative effort, Hyperledger needed direction and as a veteran of free and open software projects, Brian was the perfect person to embody the values of the Hyperledger community. Not soon after, Brian laid out the vision he had for Hyperledger to become more of an umbrella effort for software developer communities building open source blockchain and related technologies. Today, Hyperledger consists of not only Fabric and Sawtooth Lake, but also Blockchain Explorer, Cello, Iroha, and many other projects are on the way.

The Fabric and Sawtooth Lake projects picked up new contributions, developer momentum, and significant commercial interest over the past year. In fact, we saw more than 25 proof of concepts and pilots built on top of the technologies in 2016 by some of the world’s leading financial services institutions. The healthcare industry started to get interested in blockchain technology in 2016, so Hyperledger launched a Healthcare Working Group in October to house and foster technical and business-level conversations about appropriate applications for blockchain technology. New members Airbus, Wanda, and Energy Blockchain Labs point to even more industries with the potential to be reinvented by blockchain technology in 2017.

“While Hyperledger is still a relatively young initiative, the strong momentum we have after just one year is truly incredible. The quantity and quality of organizations of all different sizes that have joined the project, as well as its global expansion, has established Hyperledger as the premier venue for open source collaboration for the blockchain industry. This shows great promise for Distributed Ledger Technology beyond proof of concepts to full blown production deployments in many applications and industries in 2017.”

– Dan O’Prey of Digital Asset and chair of the Hyperledger Marketing Committee.

As for the Hyperledger community, it grew to 8,848 members across 38 Meetups, all over the world. From Sydney, to Beijing, to Singapore, to Tokyo, Dubai, Buenos Aires, Barcelona, Berlin, Madrid, Paris, London, Silicon Valley, New York, Boston, to many of the largest cities across the globe. Our Rocket.Chat channel has grown to more than 5,300 people.

“We held eight hackfests/hackathons in the past year in New York, Amsterdam and San Francisco, where hundreds of developers showed up to work together on Hyperledger,” stated Behlendorf.

“I’m really pleased with the progress we’ve made in the first year in building a collaborative spirit amongst the contributors on the various incubating projects. Contributions come in a variety of forms, ranging from code contributions, user feedback, use case and requirements analysis, editorial contributions on documentation and offers to lead or participate in the various technical working groups. All of these contributions help to advance the goals of Hyperledger and are equally valued.”

From an awareness perspective, Hyperledger was mentioned in more than 5,500 global stories in the past year, in top tier publications including the New York Times, Wall Street Journal, American Banker, Reuters, and many others. Hyperledger garnered more than 9,000 followers on Twitter, and its other social channels also saw significant growth.

“We owe a lot of the growth and success of Hyperledger in its first year to The Linux Foundation’s model of governance (both in terms of a business and technical perspective). The model has allowed for collaboration at the highest level among organizations of all shapes and sizes, as well as for developer communities, and technical experts to iterate in an open, fair and structured manner. All contributions are valued and are encouraged within Hyperledger. As of the end of January, the project has seen 3,821 commits made by 119 contributors representing 222,865 lines of code. That’s terrific for a first-year effort, and momentum continues to grow.”

“As we head towards further maturation of the Hyperledger umbrella projects to 1.0 releases and beyond, our goal is to increase enterprise developer interest and traction by communicating the benefits of developing in a truly open community. Like we see in other thriving open source communities, the power comes from public development processes, from the “do-ocracy” where governance is based on participation, and where development ideas get input and scrutiny from some of the brightest developers in the industry. The end result of all this, is code that will change how the world works.”

“We’re excited for what the future holds; We hope that you join us in the fun: https://www.hyperledger.org/. Stay up to date with all Hyperledger news here or follow us on Twitter to stay current. We hold regular hackfests for Hyperledger, so be sure to check out the events page and join us for the next one!”

You can also plug into the Hyperledger Community at github, Rocket.Chat, the wiki or their mailing list.

Facebook
Twitter
Pinterest
WhatsApp
Previous articleThe State Bank of India Initiates National Blockchain Bank Consortium
Next articleBlockApps and Red Hat Cut Deal to Deliver Hybrid Cloud Solution for Blockchain Applications in the Enterprise
Richard Kasteleinhttps://www.the-blockchain.com
In his 20s, he sailed around the world on small yachts and wrote a series of travel articles called, 'The Hitchhiker's Guide to the Seas' travelling by hitching rides on yachts (1989) in major travel and yachting publications. He currently lives in Groningen, the Netherlands where he has set down his anchor to raise a family and write. Founder and publisher of industry publication Blockchain News (EST 2015) and director of education company Blockchain Partners (Oracle Partner) – Vancouver native Richard Kastelein is an award-winning publisher, innovation executive and entrepreneur. He has written over 2500 articles on Blockchain technology and startups at Blockchain News and has also published in Harvard Business Review, Venturebeat, Wired, The Guardian and a number of other publications. Kastelein has an Honorary Ph.D. and is Chair Professor of Blockchain at China's first blockchain University in Nanchang at the Jiangxi Ahead Institute software and Technology. He has over a half a decade experience judging and rewarding some 1000+ innovation projects as an EU expert for the European Commission's SME Instrument programme as a startup assessor and as a startup judge for the UK government's Innovate UK division. Kastelein has spoken (keynotes & panels) on Blockchain technology at over 50 events in 30+ cities.