R3CEV, the largest Blockchain consortium got caught in a semantic whirlwind last week when it was noted in a slide presentation at an event for its Distributed Ledger Technology or Private Blockchain platform Corda – that they have officially moved on from  ‘Blockchain technology’ development. The cryptocommunity lined up en masse to digitally jeer the bankers, particularly at Reddit.

They don’t ‘need’ a Blockchain because it is not possible for a centralized, bank-like entity to offer the services to users that the decentralized permissionless Bitcoin Blockchain offers,

R3 founder David Rutter followed up with a retort in the organisation’s blog:

Corda’s open source distributed ledger technology was designed from the ground up to address the specific needs of the financial services industry. It is heavily inspired by and captures the benefits of blockchain systems, but with design choices that make it able to meet the needs of regulated financial institutions.

Crucially, Corda restricts access to data within an agreement to only those explicitly entitled to it, rather than the entire network. And financial agreements on Corda are intended to be enforceable, linking business logic and data to associated legal prose in order to ensure that the financial agreements on the platform are rooted firmly in law.

Corda was designed from the ground up to address the specific needs of the financial services industry. There are currently very few tangible examples of distributed ledger platforms in the market – and none that were developed with over 70 global institutions from all corners of the financial services industry. It is unique and its launch was a landmark moment for the market.

The project has been somewhat of a disaster recently with a number of members bailing out due to internal conflict over open source versus proprietary – as some of the banks and other partners were taking out patents on Blockchain – orginally released by Satoshi Nakamoto as open source software.

For instance, Goldman Sachs was taking out patents on Blockchain and there were already tensions rising in October with European R3 members apparantly getting irate that the Americans were playing both sides, but trying to secure intellectual property rights by filing for proprietary patents while still participating in the Corda project.

The decision by R3 to open source Corda and merge it with Hyperledger was probably the last straw for some in the organsiation at any rate.

In a presentation about the R3 Corda, R3CEV engineers, developers and researchers stated “No ‘Blockchain’ because we don’t need one,” admitting that the utilization and implementation of Blockchain doesn’t fit their vision and more importantly, technological compatibility. One assumes they meant Public Blockchains. 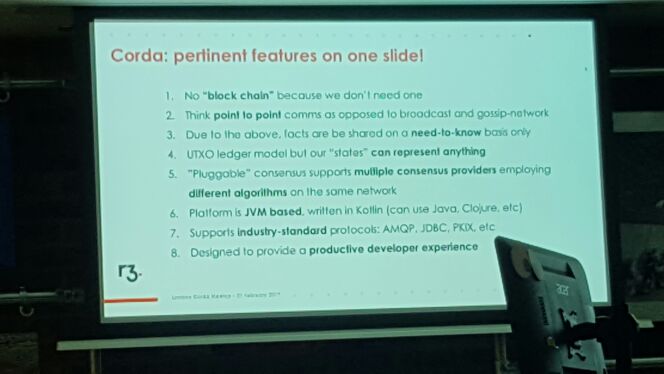 They soon followed up with another slide, mocking their critics. 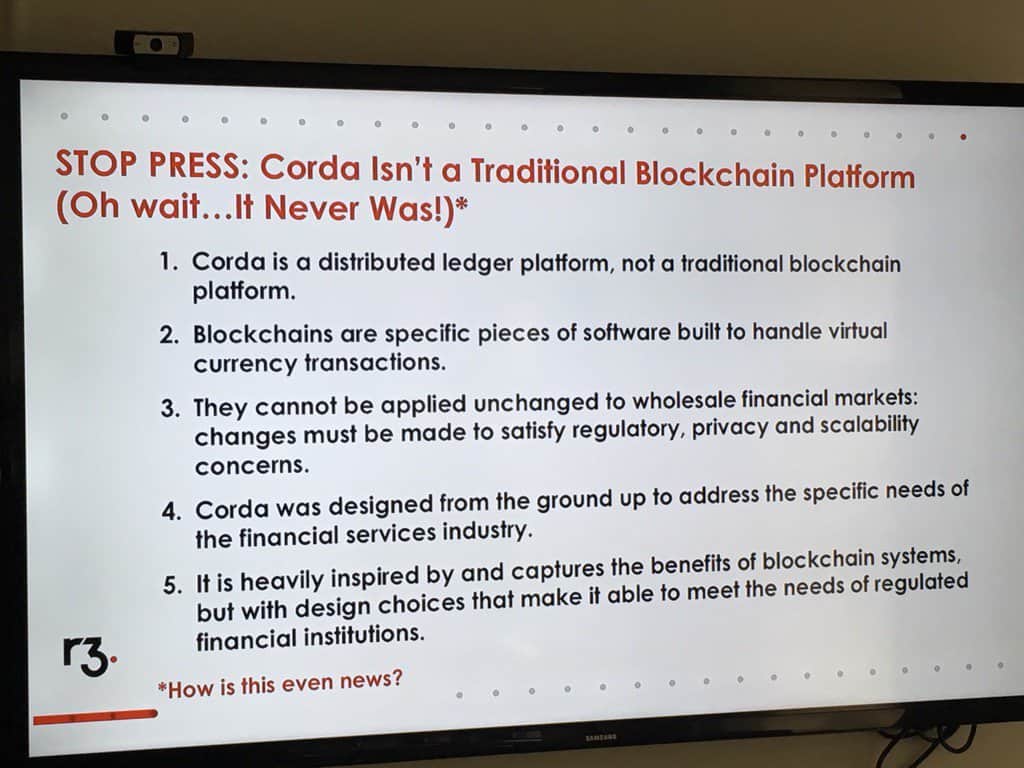 And David Rutter followed up with a retort in the organisation’s blog:

The issue of semantics is always a challenge as new ideas, technologies and cultural phenomena work their way into mainstream consciousness and the media. Rewind a few years and who would have thought the oxford english dictionary’s definition of ‘meme’ would be updated to refer to a picture of a grumpy cat or a sad michael jordan on instagram?

When we launched r3 in 2015, we were among a handful of companies inspired by the technology underpinning bitcoin, known as Blockchain, and its potential application to wholesale financial markets. Conversations in boardrooms and the media revolved around Blockchain, which at that point was the most pertinent example of distributed ledger technology in the mainstream consciousness.

Humans are creatures of habit. As time went on, the term Blockchain came to be associated with any type of distributed ledger, even as the technology matured and evolved to meet the needs of different groups of users. This isn’t an issue unique to our space. The marketing team at canon must have spent countless hours working out how to stop people referring to all copy machines as xeroxs’.