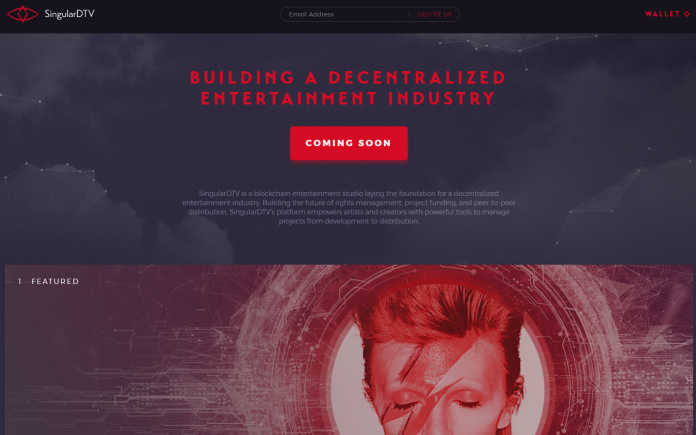 SingularDTV, the Rights Management Gateway, Project Funding Portal and VOD platform powered by Blockchain technology, released today information about the forthcoming launch of its 11 application entertainment ecosystem. This groundbreaking plan was announced at the Ethereal Summit in Brooklyn, NY, an event for which SingularDTV is a co-sponsor.

The Ethereal Summit is the first ever “SXSW of Blockchain,” designed to bring together the leading thinkers and innovators in the fields of technology, science, philosophy, and the arts — all industries for which the 11 application ecosystem will have positive implications.

Founded by Zach LeBeau, Kim Jackson, Joseph Lubin and Arie Levy Cohen, SingularDTV is launching the world’s first entertainment ‘economy’ free of intermediaries and gatekeepers that diminish the revenues of artists that control their expression.

“The SingularDTV mission is to empower every artist with a set of powerful tools for them to create and manage their projects from development to distribution, essentially allowing them to be their own economy.  There are far too many artists who fall prey to the elaborate system of gatekeepers that keep their expressions from being shared with the world, and intermediaries that extract the revenue and profit potential from those artists and keep it for themselves.”

As a first step in this innovative path, SingularDTV is introducing its first application called “Tokit”, its Rights Management Gateway.  Short for “Tokenize It”, Tokit is an entry point into the SingularDTV ecosystem and the first step to empowering artists to be their own economy.  By allowing creators to tokenize their IP, they can manage its rights, revenue and royalties through the Tokit interface.  Once onboarded into the ecosystem, users and their projects can interact with the other SingularDTV applications.  Launching at the same time as Tokit, is SingularDTV’s Project Funding Launch Pad, a kickstarter-like application where artists can manage campaigns to connect with audiences around the world.

Already operational is CODEX, SingularDTV’s research and design laboratory dedicated to the development and proliferation of tokenized ecosystems.  It is CODEX that supplies Tokit with continued innovations and evolving classes of Smart Contract System that provide artists with added features.  CODEX is also SingularDTV’s enterprise arm that services a select group of strategic partners and clients.

One of SingularDTV’s most forward-thinking applications will launch in November.  Known as EtherVision, a decentralized distribution portal, this application will be key in the distribution and tracking of television and film content via Blockchain technology.

It is intended that millions upon millions of tokenized ecosystems will be created via Tokit, representing all types of digital creations from film and television properties, to music and podcasts and ebooks.  SingularDTV’s exchange, the world’s first decentralized exchange for artists, is a platform where artists’ tokens can be traded, giving them immediate fungibility.

“The significance of what Blockchain technology is doing for the entertainment industry is as impactful as when digital camera technology and streaming platforms dis-intermediated the way entertainment was made and viewed. SingularDTV is creating a new entertainment economy so that producers, filmmakers, artists, musicians and authors can finally make profitable business from their creations, and have a direct relationship with their audiences.”

The remainder of the ecosystem’s applications, with the exception of one, are expected to be unveiled in 2018.  SingularDTV’s Union interface, designed for Blockchain signatory productions that need to adhere to union rules, processes, and pay scales, is expected in 2019.