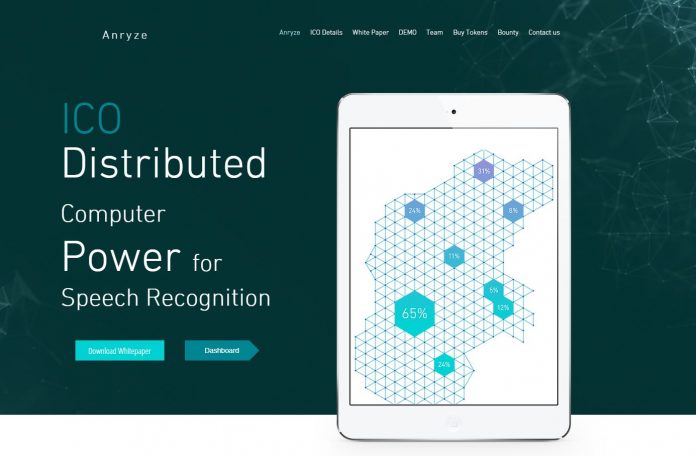 Anryze Distributed Network will be raising up to $3M through a token sale for development, marketing and team expanding.

Anryze Distributed Network uses Blockchain to the distribution of profits. Thus, 70 per cent of income from every transaction goes to miners (CPU holders), 20 per cent to investors (tokens holders), and 10 per cent is a company’s fee. Thanks to Blockchain, all transactions are transparent and automated.

Anryze Distributed Network is a world’s first decentralized speech recognition platform that not only provides better quality on fewer costs but also providing compensations to CPU holders – participants of Distributed Network. Anyone can rent out their own computing power to network and getting paid with tokens.

Anryze – US-based company that provides speech recognition services for brokerage firms, compliance departments and call centers. Have recently passed the acceleration program at NYC-based Starta Accelerator. During 4 months of acceleration, Anryze got first enterprise customers and signed letters of intent with the biggest American banks. The amount of traction became to grow rapidly. Therefore, the team came up with the idea to develop its own speech recognition engine. The main problem with existing solutions such as Google Speech API, IBM Watson, and Dragon Speech API is that they are very expensive in high volumes of recognition and provide unsatisfactory results. Moreover, they do not allow to extract useful corporate insights and any other necessary information for companies. This fact cuts off plenty of clients, for example, contact centers.

The common way how Anryze recognizes speech is the following: taking the waveform, split it on utterances by silences then try to recognize what is being said in each utterance. To do that system takes all possible combinations of words and try to match them with the audio. Anryze engine chooses the best matching combination.