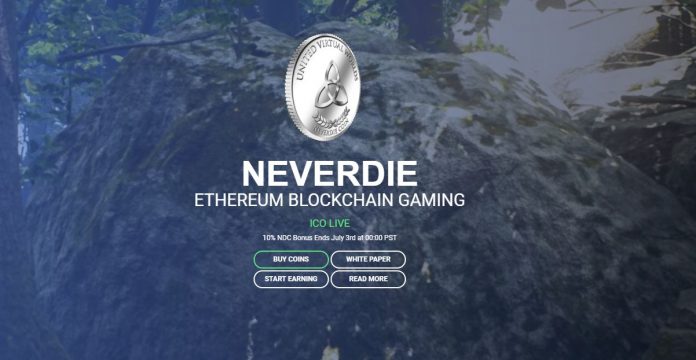 “This is a very significant partnership as South Korea is right at the forefront of digital culture when it comes to both cryptocurrency and online games,” said Jon Jacobs, CEO of NEVERDIE and Guinness Book of World Records holder for most valuable virtual items, who in 2016 became the first elected President of Virtual Reality. “It is tremendous validation for ICO KOREA to champion the NEVERDIE ICO among a very savvy gaming community,” said Jacobs.

The NEVERDIE Coin and Teleport token ICO will create monetized infrastructure to drive the growth of a trillion dollar virtual goods economy, which will support a billion gamified jobs. The Ethereum blockchain with its ERC20 token standard, provides the means for MMORPG and Virtual World goods to become inter-operable through peer to peer trading, the blockchain ledger, and decentralized, transparent smart contract game mechanics. Transparency and decentralization are the buzzwords of today and are a prerequisite to seeing a cross platform virtual goods market flourish.

The double coin ICO features the NEVERDIE Coin 400M circulation with a 25-cent launch price. The NEVERDIE Coin, which will be to the Blockchain what the Quarter was to the arcade game, has a primary function of enabling users to buy new lives. The Teleport token will be used to transport across worlds and from one game to another, and has a 10M coin circulation and a launch price of 10 cents per token. After the ICO, funds will amount to a market cap of $1 Billion before trading begins on the cryptocurrency exchanges. Also following the ICO, NEVERDIE plans to leverage the billion-dollar teleportation market cap to create gamified jobs, underwrite the intrinsic value of virtual goods, formally establish the Virtual Reality government and provide funds through a democratic process for developers to utilize API’s and SDK’s to join the Virtual goods eco-system.

“In 2016, I first announced my goal to create a Billion gamified jobs with the launch of a Virtual Reality teleportation system as the means to combat global job losses as a result of exponential advances in AI and Robotics, “ said Jacobs. Since that time, leaders of the tech industry have issued similar warnings that AI will have a massive impact on jobs and that governments should be considering more income strategies. I truly believe that gamified Jobs will bridge the gap before basic income is widely adopted; and that the global decentralized virtual goods economy will eventually lead to a shift in global governance,” he said.

Along with a star studded line up of Legendary game developers including Ultima online creator, Richard Gariott, Hilmar Veigar Petursson of CCP Games and Richard Bartle, the pioneering creator of MUD,  Jon NEVERDIE Jacobs will be a guest speaker at Gamelab #Gamechangers in Barcelona speaking on “Gaming on the Ethereum Blockchain” on June 29th. The NEVERDIE Teleport ICO officially launches on June 30th.

Jacobs was born in England, and is an actor, musician, and filmmaker. In 2002 he created the iconic avatar NEVERDIE in Entropia Universe and became the first gamer to earn a million dollars within a virtual world. His virtual mining asteroid, Club NEVERDIE entered the 2008 Guinness Book of Records as the most valuable virtual item in the world. He then founded NEVERDIE Studios and worked on Virtual Destinations for Pop culture Icons; including Michael Jackson, Lemmy and Universal Studios’ KING KONG. NEVERDIE Studios developed and currently operates ROCKtropia Virtual World, the first and only MMORPG that completely disrupts all existing game business models, by paying any player $10 -$15 per month to engage in gamified jobs. In 2016 Jacobs won the first democratic elections to become the first President of Virtual Reality. His mission as President is to create one billion gamified jobs. In 2017 he launched the NEVERDIE Coin and the Teleport token on the Ethereum Blockchain to facilitate virtual democracy and finance the development of a multiplatform virtual goods economy with DApps, including AmeVRica, AsgardVR and Payatar.

ICO KOREA is a cryptocurrency asset management firm, specializing in promoting ICO (Initial Coin Offering) Crowdfunding of in Korea. ICO KOREA track, review, and analyze the most promising ICO, and offer their extensive resources to the selected projects. ICO KOREA organize the investment conferences regularly introducing upcoming ICO to our valued Korean cryptocurrency investors and offer the early block investment or strategic investment to selected ICO projects. ICO KOREA’ mission is to provide every ICO projects the chance to meet Korean cryptocurrency community without any language barriers and to participate as early contributors for those selected ICO.

Founded in 2005, Gamelab is a non-profit organization dedicated to creating quality events where professionals, researchers, academics, entrepreneurs and investors from the digital entertainment world come together to find inspiration and share projects and ideas. Gamelab events connect and inspire the next generation of digital artists to shape the future of digital interactive experiences and environments.