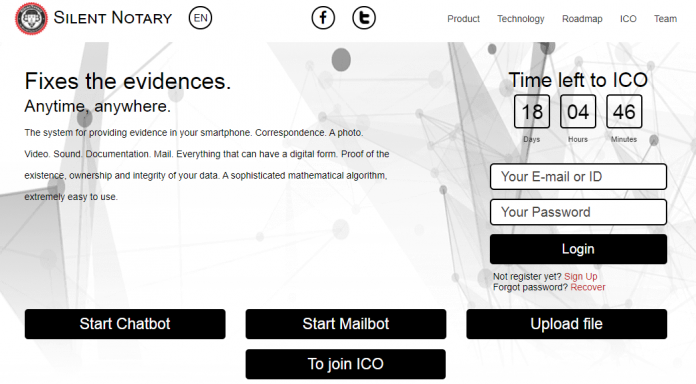 SilentNotary, a Blockchain-based notary chatbot is now a working prototype available in Facebook Messenger. The product operates in the Ethereum virtual machine and use Ethereum Blockchain to notarize user data.

To notarize a past event and make an unchanged record of the fact, the system loads digital file imprints into the Blockchain (this technology has already been worked out, there are several similar B2B systems). But for really wide distribution it was necessary to develop a very convenient user interface.

SilentNotary uses chatbot technology – which is a well-known interface for most users. It’s not necessary to install special applications, to delve into the peculiarities of their work and almost everyone can work with instant messengers.

In addition to convenience, the system has new features: the mode of multilateral discussions is implemented with the drafting and notarizing of the protocol, you can record a video or take a photo immediately from the messenger, without switching between applications, or send a voice message that records, for example, a verbal agreement.

Now every smartphone user can more effectively protect their rights, providing themselves with the necessary evidence. SilentNotary can become an entirely new phenomenon, imperceptibly changing our life.

To promote the product, legal support and expand the functionality in the near future there will be held crowdsale of platform tokens. They are planning an ICO in late August. All information is available on website silentnotary.com.