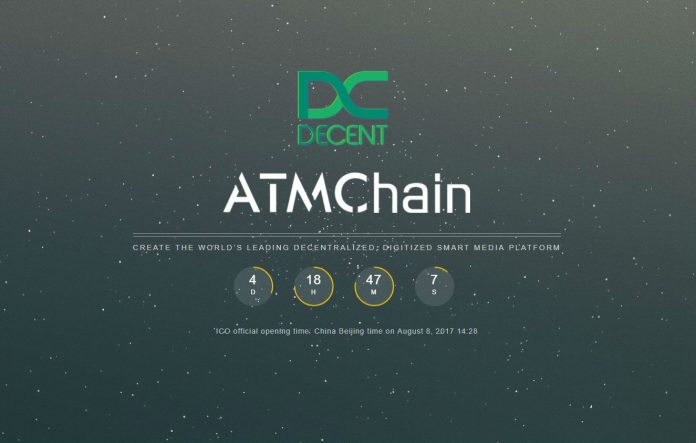 The DECENT Network has announced that ATMChain, a new third-party application and an open platform ecosystem based on the blockchain network being developed on top of the DECENT Protocol, will support DCT as a method of payment in their Initial Coin Offering (ICO), which starts on August 8, 2017 at 14:28 (China, Beijing Time).

Built on DECENT’s blockchain technology, ATMChain has a focus on the media advertising sector. To date the project has already secured some 7,000 intelligent media screens all over Beijing, Shanghai, Nanjing and Hangzhou in China, which display advertisements specific to individuals.

The development comes on the back of data from marketing intelligence service WARC, showing that the size of China’s advertising market – the world’s second largest – stands at around US$80 billion (bn). And, it is projected to reach US$120bn over the next three years, with the digital advertising market across the country maintaining its rapid pace of growth.

The company aims to use innovative methods to help advertisers better locate and effectively reach the target viewer and, via blockchain technology to directly reward the viewer – thereby helping to increase conversions and obtain improved metrics.

The system can provide access to third-party information such as cinema or social networking channels through a sub-system API (Application Programming Interface) and can subsequently extend its reach to offline industries. Users get access to more relevant ads as well as incentives for viewing, while advertisers can obtain superior data and less expensive ads by paying host sites directly.

ATMChain is an intelligent, trustworthy and open digital media ecosystem with a focus on improving and streamlining transactions and the exchange of metrics between advertisers and viewers. A novel application for the rapidly expanding blockchain technology, which it’s built upon.

Ad creators can publish ads while ATMChain distributes and rewards sites that post the content. Viewers are also rewarded for their attention and return of data. This contrasts with the current state of play where advertisers have difficulty targeting the appropriate audience and are often paying for ineffective ad placement.

Through using ATMChain, viewers get a financial incentive, site providers get rewards for hosting the ad content, and advertising agents get better data as well as traditional exposure at a lower cost thanks to third-party free transactions made possible through the DECENT Blockchain.

Matej Michalko, founder and CEO of DECENT, commenting on the development said:

“ATMChain’s adoption of our technology is another indicator that DECENT Network provides a great foundation for any third party application that might have a good idea, but requires a strong blockchain to get there.”

ATMChain plans to use multiple crypto-tokens to achieve value quantification and circulation throughout the ecosystem, so payments can happen nearly instantaneously and with guaranteed trust and security.

“DECENT as the underlying protocol is not only the cornerstone for ATMChain, but a robust high-frequency blockchain that gives our product a significant boost in terms of technology support.”

ATMChain is an open platform ecosystem built on blockchain technology with a focus on media advertising. The project aims to help advertisers better locate and effectively reach the target viewer and via blockchain, directly reward the viewer to increase conversion and obtain better metrics. The system can provide access to third-party information such as cinema, or social networking through a subsystem API and can subsequently extend its reach to offline industries. Users get access to more relevant ads as well as incentive for viewing and advertisers can get superior data and less expensive ads by paying host sites directly.