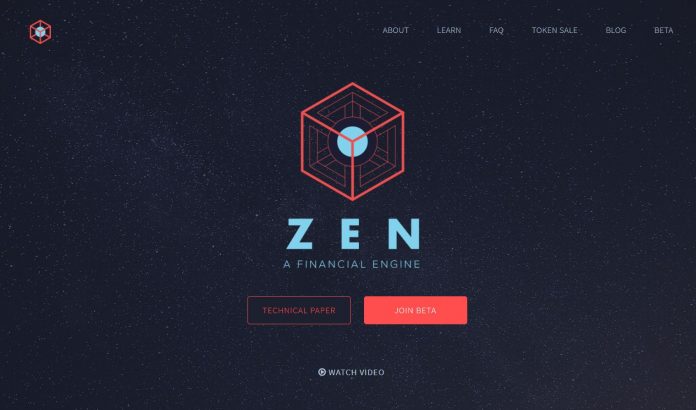 Zen Protocol, a Blockchain built for finance, is announcing its testnet and starting to on–board beta testers. Zen is making secure, peer to peer finance possible on a public Blockchain, removing the need for intermediaries such as banks and brokers.

Current financial systems are centralized, complex, and difficult to access. While established and experienced players can usually deal with the paperwork and bureaucracy, many businesses  and individuals find the barriers to entry impossible to overcome.

Potential trades and deals are lost, as these participants in finance are forced to use intermediaries to gain limited access to the system, without the ability to issue assets or even to trade in some asset classes.

Zen allows anyone to create and trade financial products, anytime, anywhere in the world, on a platform secured with a proof-of-work Blockchain. Zen provides users with an open marketplace for options, futures, digital currencies, ETFs, exotics, and many other types of financial instruments.

Built to support a comprehensive financial system, Zen is open, frictionless, and completely decentralized. The Zen Protocol’s reference implementation uses the .NET stack and the F* functional programming language, developed by Inria and Microsoft Research, to power contracts that are provably correct, and that never exhaust network resources.

Unlike other platforms, Zen makes it possible to build smart contracts with real utility, making it viable for them to use real-world data and work without any intermediaries or central control. All assets on Zen are created by contracts, making possible decentralized, automated escrow—meaning that traders on Zen no longer need trusted counterparties.

Zen miners can verify how much computation each contract requires, before ever running it. This allows Zen—unlike competing smart contract platforms—to work without a virtual machine or a resource counter, making contracts in the Zen Protocol as fast to execute as compiled system code.

Additionally, Zen has first class tokens, assets that can be held and transferred without running their issuing contracts. This is a step forward in usability and compatibility from platforms which implement tokens as a second-layer protocol. With Zen, new assets are always usable by any existing or future contract.

The Zen Blockchain is parallel to Bitcoin, with its own POW scheme, but incorporates commitments to the state of Bitcoin’s Blockchain. Every fully verifying Zen node is also a Bitcoin node. This close connection to Bitcoin makes it possible for contracts to sell assets on the Zen Blockchain for bitcoins, for users to create pegged Bitcoin assets on Zen, and for the Zen Protocol itself to use any future sidechain support in the Bitcoin protocol.

“Tokens are the incentive for mining. We believe in Bitcoin’s model of bootstrapping security via inflation, when the costs would otherwise be carried by the user base,” said Adam Perlow, CEO of Zen Protocol Development. “We are focused on creating a fully decentralized finance platform that offers secure, scalable transactions.”

Learn more by joining the conversation on Telegram: https://t.me/zenprotocol

Facebook
Twitter
Pinterest
WhatsApp
Previous articleBlockchain Startup JAAK Announce Official Pilot With Viacom UK
Next articleinvestFeed Finishes Successful Token Generation Event
Richard Kasteleinhttps://www.the-blockchain.com
In his 20s, he sailed around the world on small yachts and wrote a series of travel articles called, 'The Hitchhiker's Guide to the Seas' travelling by hitching rides on yachts (1989) in major travel and yachting publications. He currently lives in Groningen, the Netherlands where he has set down his anchor to raise a family and write. Founder and publisher of industry publication Blockchain News (EST 2015) and director of education company Blockchain Partners (Oracle Partner) – Vancouver native Richard Kastelein is an award-winning publisher, innovation executive and entrepreneur. He has written over 2500 articles on Blockchain technology and startups at Blockchain News and has also published in Harvard Business Review, Venturebeat, Wired, The Guardian and a number of other publications. Kastelein has an Honorary Ph.D. and is Chair Professor of Blockchain at China's first blockchain University in Nanchang at the Jiangxi Ahead Institute software and Technology. He has over a half a decade experience judging and rewarding some 1000+ innovation projects as an EU expert for the European Commission's SME Instrument programme as a startup assessor and as a startup judge for the UK government's Innovate UK division. Kastelein has spoken (keynotes & panels) on Blockchain technology at over 50 events in 30+ cities.