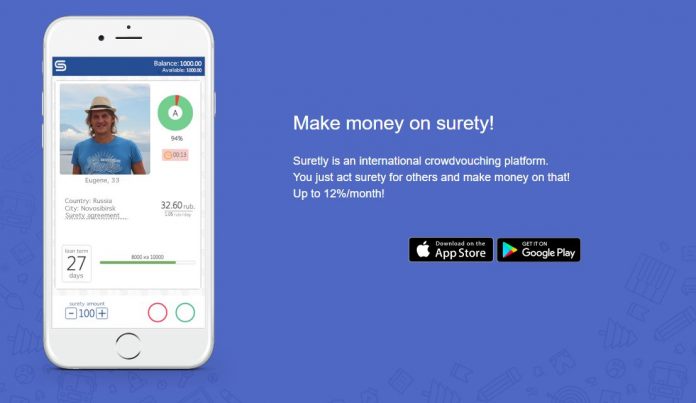 Suretly, an international fintech startup that offers crowd-sourced guarantees for micro-loans, secured its minimum funding of $1.5 million USD in a matter of hours. By the end of the campaign, the total amount of funds raised equalled $2.8 million at market rates. SUR tokens issued by the company will be accepted in Suretly’s mobile application as a guarantee of loan vouching.

‘We want to thank all the participants from the cryptocurrency community who have joined the project. Entering new markets, in particular the USA, will be the next stage of the company’s development. I should note that we began our crowdfunding campaign in less than favourable conditions: a major market correction began that day, and there was a significant fall in price for many cryptocurrencies. Under these circumstances, trust and interest from the market for the idea became even more important for us, and the results were reassuring indeed. Tokens will be integrated into Suretly’s business model, and their turnover will grow as the company develops,’ explained Eugene Lobachev, founder and CEO of Suretly.

The idea of using Blockchain technology in this business and organizing a token sale was born during the Starta acceleration program in New York. In the spring of 2017, the startup held a pre-sale for tokens and raised $350,000. “We believe in the emerging Blockchain technology and want to help tech startups integrate it into the businesses, – comments the director and co-founder of Starta Accelerator Ekaterina Dorozhkina. – “Currently, several startups, that went through our accelerator in New York, are planning tokenise their business models. We are also preparing a special acceleration program for Blockchain startups, which will be announced in the next few days”.

Dubbed ‘Tinder for loans’, Suretly is a micro-guarantee exchange, or crowdvouching platform. The exchange helps individuals to obtain to loans at lower interest rates, provided they receive guarantees from a large number of users. The loans themselves are provided by service partners – microfinancing institutions – rather than by Suretly or its tokenholders. Suretly users therefore act as a collective mind, which makes a joint decision on whether to grant or deny a loan.

The Suretly startup is a product of the business incubator developed by the Higher School of Economics, National Research University. Developers of the online exchange for micro-guarantees passed the GenerationS Start-up Accelerator and the Starta Accelerator International Accelerator Program in New York in 2017, having received investments from the accelerator in exchange for 7% of the company. Among the graduates of Starta Accelerator are such start-ups as E-Contenta, Сindicator, Anryze, Navigine, GeoCV, SendPulse, Agrieye and others. The participants of the 4th accelerator batch will be announced next week.

The Suretly app is available for download in AppStore and Google Play.