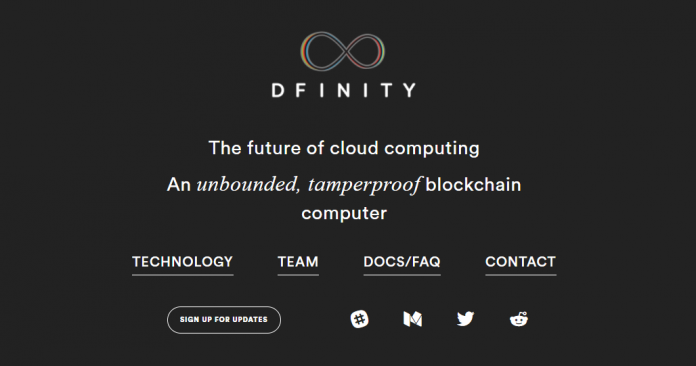 DFINITY Stiftung, the not-for-profit organization dedicated to the research and development of “DFINITY” blockchain technologies, announced its formal intent to create an open network that serves as a massive virtual mainframe computer in cyberspace that might play the role of a new kind of decentralized cloud. DFINITY will launch a multi-thousand node demonstration network in Fall 2017 that showcases some of its new technology in action.

This open network will enable the fabric of the Internet to play the role of cloud provider using novel blockchain computer technology that makes powerful and highly disruptive applications possible. For example, DFINITY will unleash the power of supply chain transactions, Internet of Things, financial markets & exchanges, charities, and intellectual property management, to name a few, on an unbounded, open and secure platform. With its dramatically increased performance and unbounded capacity relative to today’s blockchain networks, DFINITY has the potential to power even traditional enterprise IT systems.

One aim of the new network is to slash enterprise IT costs by reducing the human capital involved in supporting the development, maintenance and administration of traditional enterprise IT systems. These enterprise systems, being colocated on the same super massive virtual computer, will also be able to interoperate and incorporate the functionality provided by other services with ease. DFINITY will also enable the development of a new kind of “open source business” involving autonomous software that is updated via inbuilt governance systems and fulfill roles today performed by companies such as eBay or Uber.

The DFINITY network incorporates an algorithmic governance system that allows it to be fully adaptive with respect to economics, upgrades and other requirements, and manage the open environment it creates to ensure it is hospitable for corporate and mainstream applications.

“…the quality of our rapidly expanding team is unparalleled within the industry and composed of real superstars. We are building a NASA for decentralization with research centers in Silicon Valley and Switzerland that will rapidly advance the new Internet 3.0 paradigm.”