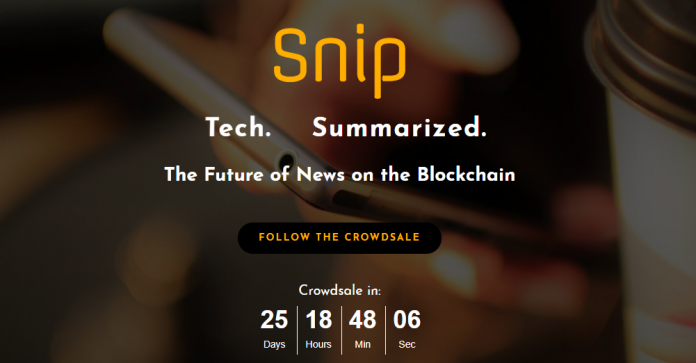 News platform Snip, which seeks to create a community-driven news outlet, has announced its crowdsale will kick off September 29th 2017.

The team has already released an alpha-version that offers core features for users and a selection of news and audio-podcasts, with over 25,000 active users creating and consuming content. The platform just recently partnered with AdEx advertising network.

As noted by Ren Reichman, Snip CEO, said partnership is expected to be quite beneficial:

“We’re especially excited about using AdEx’s bidding and anti-fraud systems, which will allow us to present user with relevant ads and deliver maximum revenue to Snip writers,”

The crowdsale will allow buyers to become early adopters of a platform  with the potential of becoming one of the world’s top media outlets, covering nearly every subject.

The team behind Snip says that with the advent of the Internet the monopoly of traditional publishers has been shattered, which resulted in significant revenue losses and development of a complex online advertisement market. Still, just like advertising, major media outlets are controlled by a handful of corporations that can dictate which news are worth publishing.

Snip, on the other hand, offers a community-driven approach where every user is entitled to create so called ‘snips’, short news stories. Creators of high-quality content are rewarded with the platform’s native tokens, SnipCoins.

“Snip is a new type of news platform, decentralized and powered by the community. On Snip, anyone can write a news story about any topic, and readers can find news that matters to them. Contributors are rewarded with tokens according to the popularity of their posts and comments. A community-based news site, owned by the community, can become the top news site in the world and cover any subject, from breaking news to entertainment and everything in between,” the project’s whitepaper reads.

Remarkably, the platform also offers filtering algorithms that effectively customize every user’s newsfeed to his or her interests.The ultimate goal of Snip is to create a censorship-free environment that rewards writers for summarized news stories on every topic.

In stark contrast to the current situation where political and commercial interests of governments and corporations set the priorities for media controlled by them, Snip is set to be available for all possible points of view.

What’s Down the Road

Underlying the system is SnipCoin. The token is used not just to reward the creators of high-quality content or those who write on poorly covered topics, but also to buy advertising space, and pay for premium options like accessing podcasts, professional features and removal of advertisement.

Over the crowdsale that will last 30 days, 3 billion SNP tokens will be issued and sold for up to  $8 million. The total amount of minted tokens is 10 billion.

Once the crowdsale is over, Snip will release an alpha version on invitation-only basis in order to have a test run of all features prior to releasing the solution in beta.

The supreme goal of the project, according to the team is to free the news industry from external control and provide a great news experience, therefore allowing people to exercise the ultimate freedom of speech.