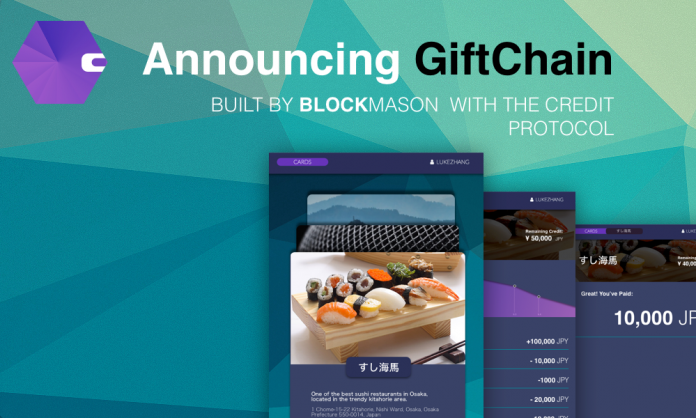 Called GiftChain, their new application will allow retailers and vendors of any size to easily issue gift cards and implement customer loyalty rewards programs secured by the Blockchain.

GiftChain will be accessible from any smartphone, making it possible for small businesses to easily track purchases and distribute rewards as would any large company.

The application will support all major fiat currencies, multiple cryptocurrencies, and even arbitrary currencies designed by the issuer (e.g. a single meal at a restaurant or a voucher for a one hour massage).

This offering comes in addition to BlockMason’s first fully-functional application built atop the Credit Protocol, Friend in Debt—or, as they refer to it, “like Venmo on the Blockchain, but better!”

BlockMason has already distinguished itself from many other Blockchain startups by offering a working product prior to their Token Sale.

While GiftChain may not be free for public testing until after the commencement of their token offering, the announcement, says the team,  further demonstrates BlockMason’s commitment to product development and customer support.

Additionally, the release of GiftChain proves the flexibility and viability of their Credit Protocol, which has been generating buzz for being the first securities-law compliant Token Sale open to the general American public after the SEC’s report on the Dao.

The Credit Protocol is a simple system for recording debts and credits on the Blockchain, which can be customized for a variety of organizational, business, or individual purposes through smart contracts programmed atop the protocol. In their Whitepaper, BlockMason has announced their intent to launch a bounty program for the development of template Credit Protocol smart contracts.

While Giftchain is still in development, BlockMason has reportedly discussed testing an upcoming beta version with several retailers. According to BlockMason co-founder Jared Bowie, a finished GiftChain smart contract will likely be available in the next month, with a functional front-end available for public use after the Token Sale.