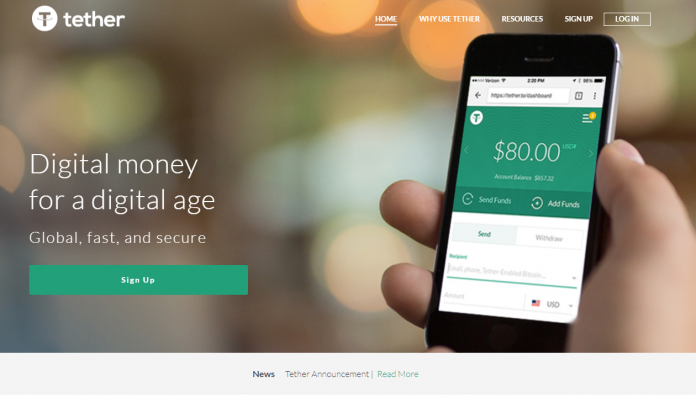 Tether Limited, the leading provider of tokenized traditional government-backed currencies, today announced in partnership with Ethfinex the launch of Tether ERC20 tokens on the Ethereum Blockchain, enabling tokenized US dollars to be exchanged on the Ethereum network for the first time.

Launched in 2014, Tether claims to be the first Blockchain-enabled platform to allow traditional currencies to be tokenized, allowing users to transact with fiat currencies across the exchange without the relative volatility associated with digital currencies.

“Following the success of our widely used US Dollar tokenisation on the Bitcoin Blockchain, this latest version enables interoperability with Ethereum-based protocols and DApps. We believe this new development will reduce the current interbank delays often involved in exchange withdrawal and allow our users access to tokenized USD – a first for the industry.”

Partnering with Tether by creating the smart contracts is Ethfinex, the leading trading and information hub for projects on the Ethereum Blockchain, set to offer access to a highly liquid and advanced trading platform for ERC20 tokens.

“The number of tokens and assets being tokenized on top of the Ethereum platform is growing rapidly, with many proving disruptive to traditional business models. By enabling all ERC20 compatible applications and protocols to integrate tokenized USD, we expect to see enhanced efficiency and further stability on the Ethereum network,” said Will Harborne, Project Lead at Ethfinex.

Tether users deposit US dollars, and soon Euros, Japanese Yen and other fiat currencies which are converted into a 1-to-1 backed digital currency called tether ₮. Each Tether then carries a name and symbol of the underlying asset it represents, and is transferable and tradeable as a standard ERC20 token.

Integrating with Tether as a compatible application is TokenCard, a smart-contract powered debit card and Ethereum gateway founded in 2016. Upon launch of their card, TokenCard will accept the Tether ERC20, enabling their users to use tokenized fiat currencies for everyday transactions.

“The launch of Tether fiat tokens on the Ethereum network is a huge step towards mass consumer adoption. This blurs the boundaries of what is considered a Blockchain asset versus a ‘regular’ asset and will enable people to own the fiat currencies most familiar to them but in a tradeable digital form. This will make it much easier for the majority to use Ethereum powered platforms, like TokenCard. The option of choosing TokenCard over traditional banks becomes even easier if a national currency can be held in token form. The strength and versatility of the Ethereum Blockchain enables a safe and secure means of transferring funds anywhere in the world without needing to use a bank of any kind.”

“We believe this development will not only open up the world of cryptocurrencies to more mainstream consumers, but also set the standard, and encourage other companies to be more innovative and accessible in their product and service offering at this pivotal time for money and payments,” concluded Sellars.

Tether Limited holds 1:1 reserves for all Tether generated in its contract where each tether is backed by its corresponding currency on deposit. A total list of balances issued to all Tether can be viewed, verified and checked against the on-chain deployments of Tether contracts by any interested party. Tether will be fully transparent and audited to demonstrate 100 percent reserves at all times, and these reports will be published and communicated on the Tether website.

Facebook
Twitter
Pinterest
WhatsApp
Previous articleBelfrics Singapore Launches Belrium ICO, a KYC Complaint Blockchain
Next articleAmerican Banker’s Marc Hochstein Joins CoinDesk as Managing Editor
Richard Kasteleinhttps://www.the-blockchain.com
In his 20s, he sailed around the world on small yachts and wrote a series of travel articles called, 'The Hitchhiker's Guide to the Seas' travelling by hitching rides on yachts (1989) in major travel and yachting publications. He currently lives in Groningen, the Netherlands where he has set down his anchor to raise a family and write. Founder and publisher of industry publication Blockchain News (EST 2015) and director of education company Blockchain Partners (Oracle Partner) – Vancouver native Richard Kastelein is an award-winning publisher, innovation executive and entrepreneur. He has written over 2500 articles on Blockchain technology and startups at Blockchain News and has also published in Harvard Business Review, Venturebeat, Wired, The Guardian and a number of other publications. Kastelein has an Honorary Ph.D. and is Chair Professor of Blockchain at China's first blockchain University in Nanchang at the Jiangxi Ahead Institute software and Technology. He has over a half a decade experience judging and rewarding some 1000+ innovation projects as an EU expert for the European Commission's SME Instrument programme as a startup assessor and as a startup judge for the UK government's Innovate UK division. Kastelein has spoken (keynotes & panels) on Blockchain technology at over 50 events in 30+ cities.