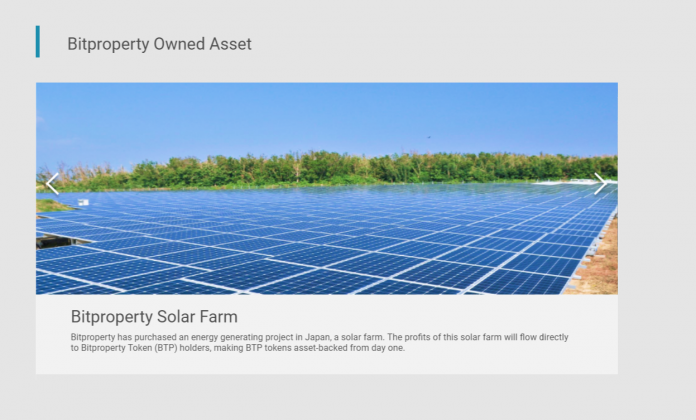 Japan-based blockchain startup BitProperty is planning to release a closed beta version of its platform on October 5th, 2017, which will be followed by a token sale campaign.

The project is aimed at decentralization of real estate investment around the globe using the Ethereum blockchain and smart contracts to facilitate transactions, attribute ownership rights, and distribute earnings generated from the property. The platform will work with two types of tokens. So-called asset token represents a property or asset listed on the platform and entitles its holders to earn dividends from the asset in question. The second kind of token, BTP platform token, is backed by BitProperty-managed assets and earns dividends from the platform’s transaction fees, as well as from the profits generated by the company’s own solar farm.

The primary focus of BitProperty is renewable energy projects. In early 2016 the company has concluded partnership with real estate developer Nikken Housing and acquired the second largest solar farm in Japan. Ultimately, the project is built to eliminate financial and regulatory barriers to real estate investment and open real estate deals to investors from all over the world, providing them with high-liquidity assets despite the jurisdiction.

After the release of beta, scheduled on October 5th, Bitproperty will hold an ICO, offering 35% of 2.9 billion issued BTP to investors for 0.0001 ETH each. Token sale will kick off on October 15th and will be available over 30 day or until the maximum cap of 100 000 ETH is reached.

“We have a vision at Bitproperty of breaking down the barriers to real-estate investment, which is currently a difficult market to enter due to high cost and burdensome regulations. By tokenizing investment opportunities it will unlock this market to a vast number of new investors all over the world. This is our goal, and the ICO is a key step towards helping us achieve that,” said Ryo Nomura, the CEO of BitProperty.

The raised funds will be used to cover further development, recruit of new specialists, and ensure legal compliance procedures, testing and marketing activities. A publicly available beta-version of Bitproperty platform is set to launch in January 2018, followed by a final release in March 2018.