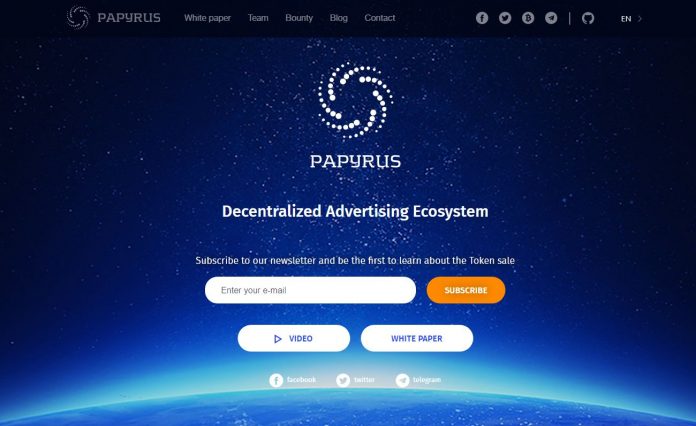 Papyrus— the world’s first fully comprehensive and highly scalable decentralized ecosystem for digital advertising—is proud to announce a partnership with Bancor, a well-known crypto project that has created a protocol for the instant conversion of Ethereum ERC20 tokens.

Shortly after the first round of Papyrus’s TGE this partnership will bring to participants of the Papyrus ecosystem a Bancor Token Changer—a decentralized and automated solution for easily converting PRP to BNT. BNT holds an ETH reserve, therefore two-way PRP—ETH conversions will also be immediately possible. Exchange of PRP to other ERC20 tokens integrated with the Bancor protocol will be supported as well. The ERC20 tokens might soon include such stable coins like USDTether that has recently announced that it is to develop an ERC20-compliant version of the cryptocurrency.

The PRP—BNT Token Changer is essentially a decentralized liquidity pool of PRP and BNT tokens, reserved in a Bancor protocol compliant Smart Token. A Smart Token is a new type of cryptocurrency, pioneered by Bancor, which utilizes reserve tokens and smart contracts to allow for the decentralized conversion of tokens through a two-step process entailing asynchronous real-time pricing of the Smart Token according to a formula based on a predetermined parameter, the CRR—a constant reserve ratio of the balance of each of the reserve tokens to the Smart Token’s market cap.

In other words, thanks to the PRP—BNT Token Changer, publishers and advertisers participating in the Papyrus ecosystem won’t have to deal with redundant costs and challenges with liquidity: they’ll be able to easily exchange PRP—received for their services—to BNT, ETH, or any other ERC20-compliant tokens in the Bancor decentralized liquidity network. Similarly, external players in the digital advertising market interested in utilizing the services of Papyrus participants or in placing a PoS-deposit to register in the ecosystem will be able to easily buy PRP directly from the Token Changer’s smart contract, avoiding cryptocurrency exchanges and counterparty risk.

Alexander Shvets, Product Director at Papyrus, commented on the partnership: “The PRP—BNT Token Changer will protect the participants of Papyrus from volatility and the inherent risks of centralized platforms and, therefore, will facilitate the formation of the market in our decentralized ecosystem. And since this Token Changer will immediately ensure continuous liquidity for our prototype PRP token, we’ll be able to concentrate on integrating new partners and accelerating the development of our ecosystem.”

Eyal Hertzog, Chief Product Architect at Bancor, who has recently joined the Papyrus advisory board as Strategy Advisor, gave the following statement on the collaboration of the two projects:

“At Bancor, we want to enable a global decentralized liquidity network, where token conversions will be automated, transparent and secure. We are thrilled to have found kindred spirits at Papyrus—a unique project that aims to transform the digital advertising industry once and for all, utilizing blockchain technology to create an ecosystem that will endow the interactions of all participants—from publishers and advertisers to end users—with efficiency, transparency and security. We look forward to their progress and collaboration with like-minded initiatives.”

The technical details on the PRP—BNT Token Changer will be announced after the completion of the first round of the PRP token sale that begins on October 12 (14:00 UTC) and ends on November 2 (14:00 UTC): the starting price — $0.8, the hard cap — $5 million.